FOUR bills that would ban the sale of flavored vapor products had a public hearing on March 29th. Click the link below to find out how you can oppose these bills. Please TAKE ACTION NOW!

While the flavor ban passed committee on 3/23, it still has to pass in the Senate & House. Your steady contact with can make a difference prior to floor votes. Contact your lawmakers and urge them to reject SB 367!

The most terrifying health risk from vaping is baseless, unscientific regulation.

I was scared, because you know, past events, of police officers and Black people, you expect him to be shot, but she didn’t,” said Brendon Aldridge.

“He was only vaping.”

READ MORE: He Was Only Vaping, Says Witness at Skate Park Where Teen was Tased by Police

“Most brands don’t even use the word nicotine in an effort to get around regulations,” Dr. Morgan said.

Maybe this is a good time to review the regulations and figure out why there is consumer demand for illicit products instead of regulated products?

READ MORE: Illegal nicotine vapes are not what they say on the packet, says expert Dr Jody Morgan 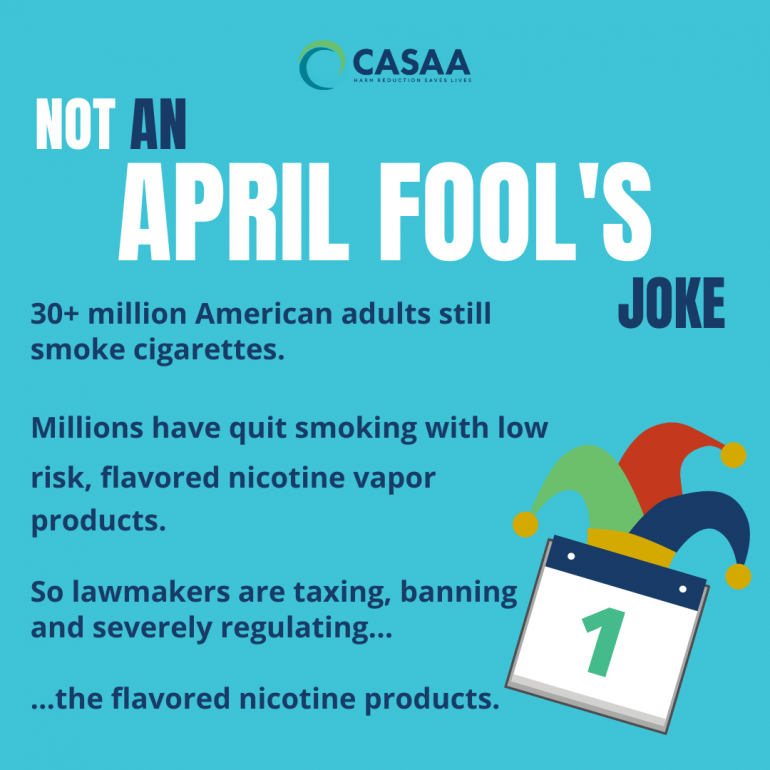 Yet another example of WHO letting ideology and Anti-Nicotine and Tobacco Zealotry (instead of science) dictate policies, potentially putting millions of lives unnecessarily at risk.

The World Health organization is rejecting vaccines based on the palatability of the funding source, and not science.

Discouraging teen substance use is laudable, but the CATCH program focuses on vilifying vaping without providing sufficient coping alternatives or covering relative risks. This may have the unintended consequence of high risk youth smoking instead of vaping.

Don’t miss this week’s Space where we spoke in-depth with Dr. Brad Rodu about the latest data on youth vaping in the US!

If you missed the fantastic Twitter Spaces discussion on March 30th about the "teen vaping epidemic" myth with Dr. Brad Rodu, you can listen to the recording now! https://t.co/dcL71gg6L5

Thank goodness BJ McCollister of Flavor Hooks Kids Maine isn’t worried about a flavor ban creating a black market (apparently prohibition never creates illicit markets?) and he has sage advice for adults who depend on the products to not smoke: Just quit.

Good report by @WAGMnews and @BBouchardWagm about a Maine bill that bans adult products disguised as a plan to protect youth. It could focus on disposable vape, but instead it bans everything including products kids aren't using. https://t.co/XkyUuWO9nH

Obviously, we’re being extremely sarcastic. Here’s the Call to Action to tell your lawmakers to OPPOSE this ridiculous flavor ban bill:

FDA Center for Tobacco Products will name current CTP Deputy Director Michele Mital as acting director when Mitch Zeller retires in April. The agency is conducting a search for a permanent director, but Mital is thought most likely to keep the job.

By @whycherrywhy
“Now the FDA faces dozens of legal challenges from independent vaping manufacturers, and has been forced to rescind some MDOs, while others have been stayed by federal courts.” https://t.co/mCegoA42Oh

Teens use drugs and alcohol because they’re stressed, anxious, depressed, rebellious, neglected and/or abused, not because they see tobacco use or vaping on Netflix.

But rather than tackle those important issues, lawmakers fall back on “do something/anything” policies…which ultimately accomplish nothing.

I don’t think this strategy is going to work any better than it did for teen smoking and movie smoking https://t.co/gn50P8f5un pic.twitter.com/NgkbL403ot