HB 1570 has passed the final hurdle on its way to the governor’s desk. The bill has been amended to include an exemption for flavored products that receive a marketing order from the FDA.

CASAA encourages our members in Hawaii to urge Governor Ige to Veto this bill! Take Action and send your message TODAY!

Governor Ige has until June 27 to make a decision on this bill.

As reported by CASAA director Jim McDonald for Vaping 360: Hard work by vaping advocates helped kill flavor ban bills backed by the Campaign for Tobacco-Free Kids in two state legislatures. In a year thought to be ripe for state-level flavor bans, so far only Hawaii’s legislature has passed a bill prohibiting vape flavors in 2022. (Note: Hawai’i’s bill hasn’t yet been signed by the governor as of this blog post. See CASAA’s Call to Action above.)

San Diego City Council officially passed an ordinance Tuesday to ban the sale of flavored (incl. menthol) tobacco products, effective Jan. 1, 2023. Of course, the supporters were most happy about banning the low risk vapor products, not the cigarettes.

IN THE NEWS // Mini Documentary Exposes the Truth About Vaping

What Vaping Did: A mini documentary about the war on vaping by Natalie Dowzicky for Reason Magazine.

“By banning options that smokers overwhelmingly prefer, and leaving the traditional cigarette untouched, the FDA is repeating the mistakes of the drug war.”

Researchers at Queen Mary University in London say nicotine vaping “poses no greater risk to the mother or baby than nicotine patches, which are both better options than continuing to smoke throughout pregnancy.”

Our @HealthQMUL & @QMULQuitSmoking team's research on the potential of e-cigarettes to help with smoking cessation during pregnancy in this Monday's @guardian 🚭🤰👶https://t.co/dSjjXFZumu@QMUL_WIPH

Researchers make a very bold claim based on scant evidence.

Red Flag #1: “Dual Use” included anyone who smoked and reported ANY e-cig use (even once) during data collection.

Red Flag #2: The data period of 2013-19 is unlikely enough time to significantly reduce risks after decades of smoking. Even if someone completely switches to vaping, their health risks aren’t going to immediately go away anymore than they would have had they quit cold turkey.

Red Flag #3: The press release from researchers – and therefore reporting on the study – focused on the lack of risk reduction for those who continued to smoke. This was not a surprising result. However, they also downplayed or completely ignored the fact that the study found SIGNIFICANT reduction in risks for people who switched completely from smoking to vaping.

UPDATE: @American_Heart ignored the "exclusive vaping" heart benefits the study found to push harms from dual use.
Why wouldn't it support exclusive vaping?
Headline: "No health benefits among adults who used both e-cigarettes and traditional cigarettes"https://t.co/MGqrRSDPI7

READ MORE: No health benefits among adults who used both e-cigarettes and traditional cigarettes

When reporting the above-mentioned study, WINK News put out a completely inaccurate headline for their article stating “Study finds cigarette smokers who switch to vaping don’t see decreased health risks.” This is false. People who switched completely found significant health benefits. It was people who continued smoking while vaping who didn’t see a decrease in risks.

How about reading the study before writing about it?

"Compared with smoking, e-cigarette use was associated with 30% to 40% lower CVD risk, although this association was only significant for the any CVD outcome."

“The most profound reason is that tobacco control activists really need an enemy. They frame their work in war-like language, and the leaders had their formative experiences in the tobacco wars of the last century….Fighting wars is what they do, even if this is increasingly at the expense of public health.” ~Clive Bates

Tased by police, strip searched in school, blacklisted from schools & now BEATEN for vaping nicotine. These are relatively low risk products compared to other teen behaviors. Why are we terrorizing, stigmatizing & physically assaulting children for this?? CASAA’s Jim McDonald reports for Vaping360.

This is the kind of police state you want. Quit pretending you care about kids.https://t.co/0RBHCTXwAf

FDA Commissioner Dr. Robert Califf has named Dr. Brian King as successor to recently retired director of the FDA’s Center for Tobacco Products (CTP), Mitch Zeller. Whether or not this is good or bad for tobacco harm reduction advocates remains to be seen, but the outlook among advocates is grim.

By @Alex_Norcia
“Many observers have pointed to King’s botching, in his CDC role, of the lung illnesses—misleadingly dubbed “e-cigarette or vaping use-associated lung injury,” or EVALI—that cropped up in the summer of 2019. https://t.co/RErU7SfQpR 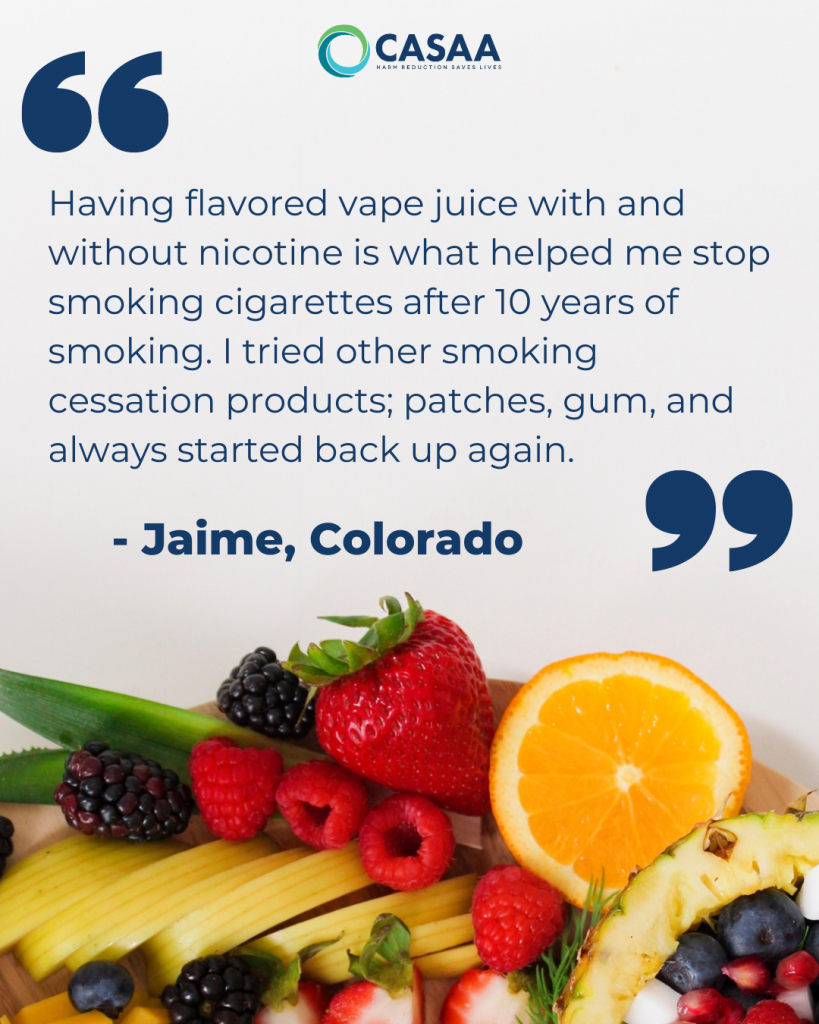 What is bodily autonomy? It is just about abortion? Drugs? Vaping? All of the above? Join the CASAA board on the latest CASAA Spaces for a spirited discussion to find out!

Recently, we spoke with Clive Bates, a tobacco harm reduction advocate and former director of ASH UK, who brought us his expert “insider” perspectives on tobacco control, and we discussed the madness of menthol bans with journalist, director of consumer freedom at Reason Foundation (and vaper) Guy Bentley!

Show your support by shopping our store! Our president (and brilliant website/swag designer) Danielle has added some awesome new designs to CASAA’s apparel shop, plus there is a Memorial Day sale starting May 23rd! 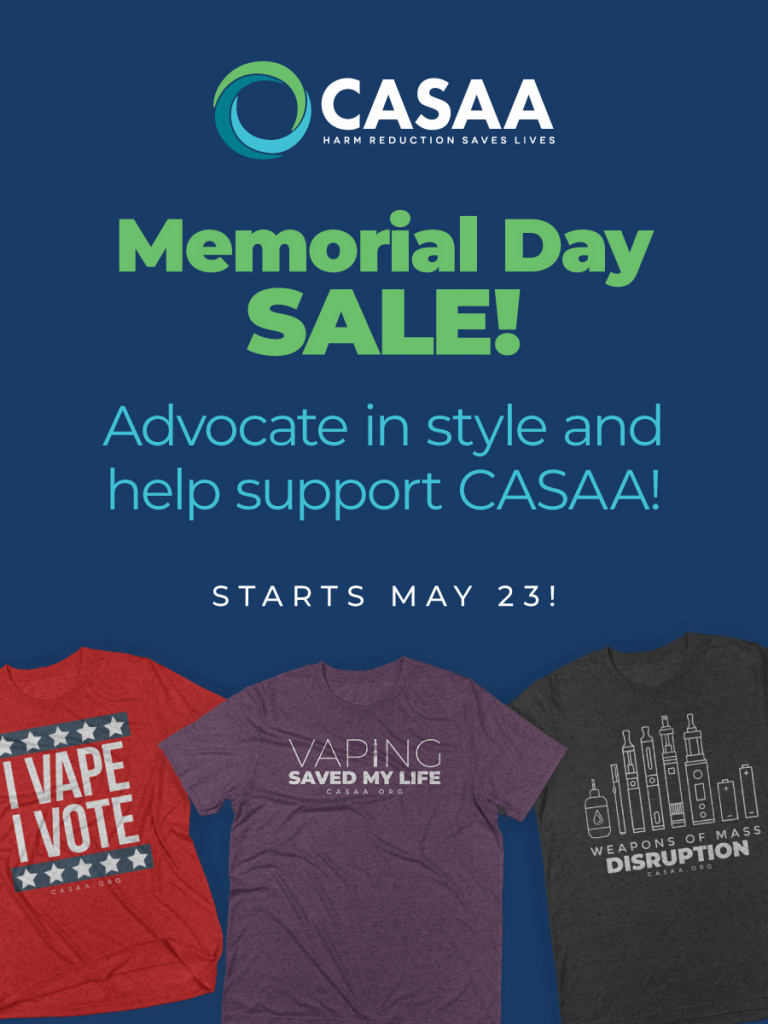