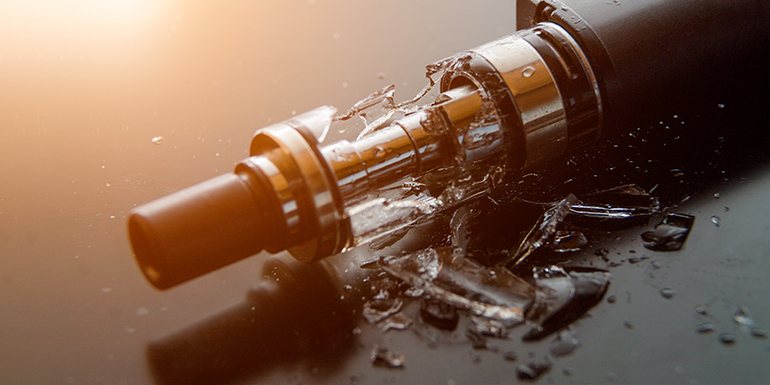 In light of the news coming out from the FDA over the past week about vapor product PMTAs, we wanted to address some of the most common questions, rumors, and misinformation that have been circulating.

Why does the FDA regulate vapor products as tobacco products?

The short story begins in 2009, when the FDA tried to ban the sale of vapor products as “unapproved drugs” being marketed as smoking cessation aids. Vapor companies responded with a lawsuit arguing that their products were not intended to be a smoking cessation treatment, which would require FDA approval as a drug/device in order to be sold. Instead, plaintiffs argued that their products were simply competing with sales of cigarettes. In 2010, The judge ruled in favor of the vapor companies, which stopped FDA from banning vapor products as unapproved drugs – as long as they were not marketed as smoking cessation therapies. Judge Leon also gave the opinion that FDA may be able to regulate vapor products as tobacco under the Family Smoking Prevention and Tobacco Control Act (FSPTCA or TCA), enacted in 2009.

Under the TCA, which was written in part by cigarette companies and anti-tobacco activists, Congress gave the FDA authority to regulate the manufacture, distribution, and marketing of tobacco and tobacco-derived products. The act “grandfathered” existing cigarettes and other leaf-tobacco products, while requiring any new products and products that FDA “deems to be subject to the law” to go through an onerous and expensive approval process. Vapor products were not sold in the U.S. when the TCA was conceived in the early-2000s, so they were not immediately included in FDA’s new regulatory authority. While the TCA was written to immediately address leaf-tobacco products – such as cigarettes, roll-your-own, and smokeless tobacco – Congress left the door open for FDA to include any product “made or derived from tobacco”.

In 2016, FDA issued a “final deeming rule” that swept vapor products into FDA’s regulatory authority over tobacco. The agency’s justification for this classification is that the nicotine in vapor products is derived from tobacco.

For a complete history on how the Food & Drug Administration (FDA) came to regulate vapor and other nicotine products, please see CASAA’s Historical Timeline of Vaping and Electronic Cigarettes.

What does “PMTA” mean?

PMTA is an acronym for “Pre-Market Tobacco Application.” Manufacturers that introduced products to the market (or modified them) after the February 15, 2007 grandfather date are required to submit PMTAs to the FDA if they intend to continue selling them. These applications must demonstrate that the product is “appropriate for the protection of public health.” Because no vapor products were on the market prior to the grandfather date, they are all required to undergo this premarket review process by FDA.

Did the FDA approve cigarettes?

No. Cigarettes that were on the market before February 15, 2007 are exempted from having to go through premarket review, per the TCA. While exempted products are not “FDA-approved,” they – and the companies that make them – enjoy somewhat of a safe harbor as the act also prohibits FDA from completely banning entire classes of tobacco products, requiring prescriptions to purchase tobacco products, or requiring tobacco companies to lower the nicotine in their products to zero.

To date, the only products containing nicotine or tobacco to receive FDA marketing authorizations are very low nicotine content cigarettes (VLNC), a heat-not-burn product, and a line of snus products.

Why did the FDA just reject millions of vapor product PMTAs?

This is the PMTA process in action. The FDA has recently issued both “refuse to file” (RTF) and “marketing denial orders” (MDO) for millions of products. These products were reportedly rejected due to a number of factors, including incomplete applications, missing Environmental Assessments, or insufficient evidence demonstrating that they “are appropriate for the protection of the public health.”

As of September 3, 2021, no vapor products have received market authorization from FDA.

Not necessarily. Rejecting PMTAs for “flavored” vapor products prior to reviewing the data would go against FDA’s mandate to thoroughly consider the evidence. On the other hand, FDA is under tremendous pressure from lawmakers and anti-tobacco activists to do just that. Although we don’t know for certain, it appears that the millions of products recently receiving MDOs were denied due to incomplete applications. While the FDA’s statement on the matter implies that these applications lacked evidence demonstrating “enough of a benefit to adult smokers that would overcome the risk posed to youth,” in reality, such product-specific research (including randomized control trials and longitudinal cohort studies) may be unaffordable to most companies.

Moreover, the September 2020 deadline (moved up from August 2022 by court order in 2019) may not have afforded most companies enough time to complete the research. While it may seem like the FDA is indiscriminately denying marketing orders for “flavored” products, we won’t know for sure until all of the applications are reviewed.

What can consumers do to stop the FDA from banning more products?

To clarify, an MDO or RTF is not a “ban.” They mean that the premarket application for a particular product is either incomplete, or that the evidence presented failed to satisfy the FDA, and the product cannot be sold legally in the United States. This is part of the authorization process and it is being carried out under court order.

At the same time, anti-tobacco activists are promoting prohibition at the state and local level. While the prospects of seeing a “flavored” vapor product authorized by FDA appear bleak at the moment, many people in tobacco control are visibly worried that something other than tobacco flavor will be authorized for sale. Even though states are not allowed to enforce their own product standards, the TCA does not prohibit them from regulating sales of tobacco products. There is still a need to educate lawmakers about tobacco harm reduction and equip them to resist flavor bans.

Can companies switch to synthetic nicotine and avoid FDA regulation?

Update: In March 2022 Congress passed the “Consolidated Appropriations Act of 2022,” also known as the Omnibus Budget bill, which included language that gave FDA authority to regulate synthetic nicotine just as it does tobacco-derived nicotine, effectively eliminating the loophole.

Synthetic nicotine (nicotine made in a lab, not extracted from the tobacco plant) is a temporary solution, at best. While the FDA has stated that non-tobacco nicotine currently falls outside of its regulatory authority, state and local governments are already updating their laws to include it. Alabama, for example, recently banned the sale of vapor products containing synthetic nicotine unless they receive marketing orders from the FDA. Several states are working on or have already adopted legislation that incorporates synthetic nicotine into existing tobacco regulations.

FDA may, in the future, have the ability to regulate synthetic nicotine as a tobacco product. Currently, there is discussion about FDA’s authority over lab-made nicotine as a drug. Regardless of which path FDA is able to take, it is likely we will see federal regulation in the near future.

Are any vapor products going to be legally available after September 9th?

CASAA can’t predict what will happen, but it seems likely that the FDA may issue marketing orders for at least some tobacco-flavored vapor products. If the agency is sticking to its proposal to ban menthol cigarettes, there may be marketing orders for mint, menthol, and wintergreen flavors as well.

What can we do, as consumers, if our preferred product is no longer available?

Your options depend on where you live. And while CASAA cannot advise our members to engage in illegal activities, we can certainly point out the obvious, namely, that informal sources of vapor products are already available.

CASAA will not echo the battle cry of tone-deaf officials referring people to FDA-approved NRTs and prescriptions. You’ve probably already tried them all. But there are other, smoke-free products that you may want to consider. Specifically, Swedish snus, American moist snuff (dip), and nicotine pouches (although these may soon be captured by synthetic nicotine regulations).

Or you may find DIYing rewarding – just like the people who started this industry until the FDA stepped in and crushed their dreams of putting cigarette companies out of business. If you’re interested in more information on DIYing, check out CASAA’s interview with two veteran DIY experts below.