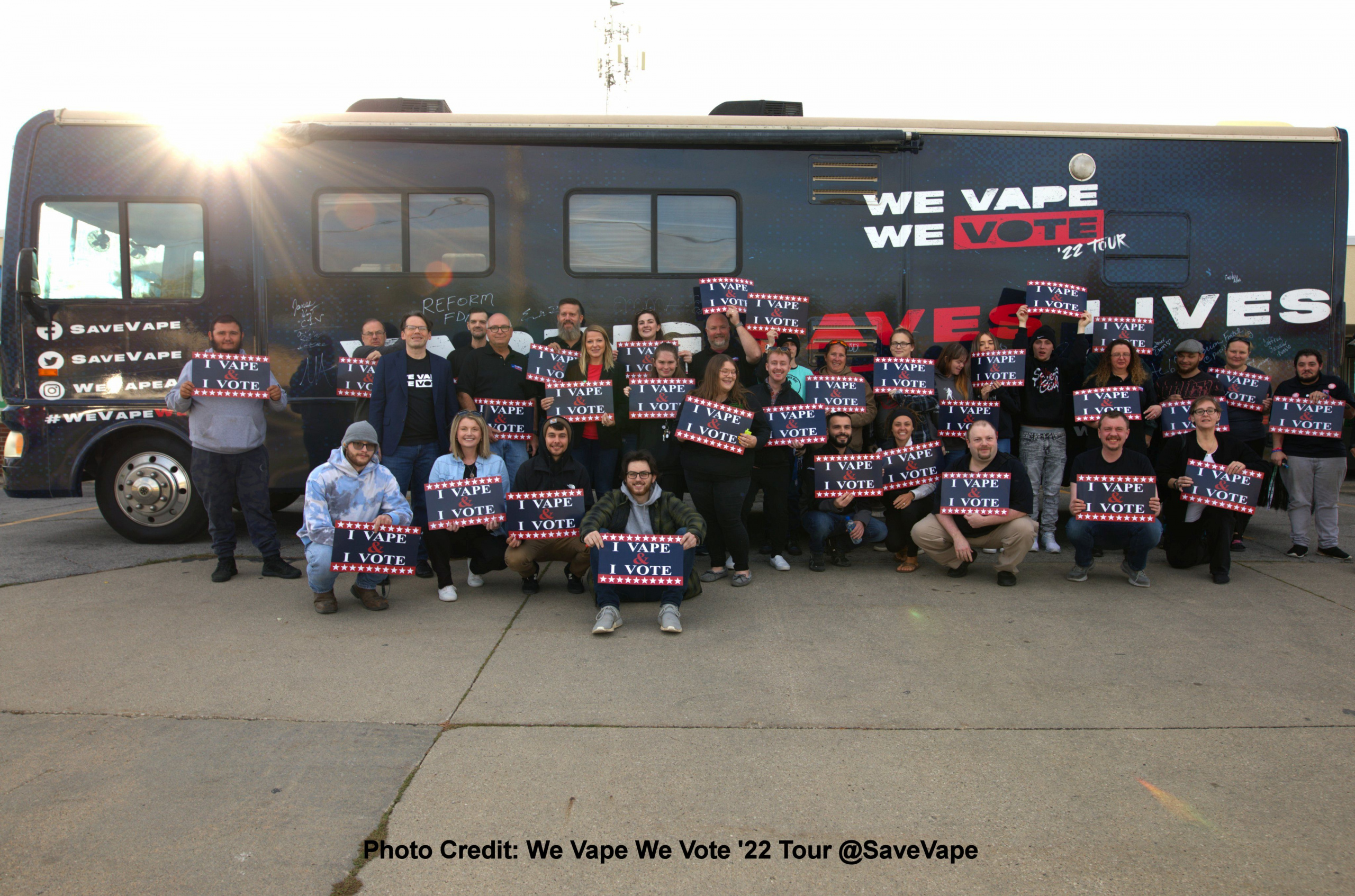 A bill that would ban the sale of flavored vapor products (and possibly other smoke-free nicotine products) is expected to be heard and discussed at a town hall meeting on Tuesday 10/25/22. Click the link for more info!

A survey has been set up to gather community input on the FLAVOR BAN proposal. You can participate by following the link to the flavor ban survey in the Call to Action below. Take Action!

The first reading for a flavor ban is scheduled to take place in early December, with the goal of activating a ban in April 2023.

ADVOCACY // We Vape We Vote Tour

The We Vape We Vote Tour started October 8th and runs through October 26th, traveling from Arizona, through the Midwest to the East Coast and ending in Florida. Register on the website below to join in a rally near you! 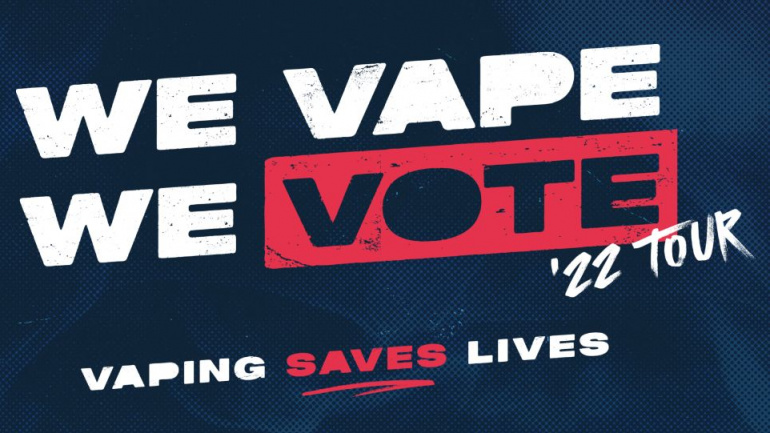 Come on by share your story with a Senator who WANTS to listen to vapers. #VapingSavesLives pic.twitter.com/bbbN2R9fxG

The recent comprehensive report from England’s Office of Health Improvement and Disparities confirms once again that #vaping is 95% safer than smoking. This short video featuring THR expert and advocate, Dr. Colin Mendelsohn from ATHRA, explains why (3m 48s)

New study adds to earlier research suggesting the importance of acknowledging the potential benefits of vaping for “accidental quitting.” Even with NO intention of quitting smoking, those who vaped daily still had a MUCH higher quit rate than non-vapers.

Uptake of nicotine vaping appears to be strongly associated with cigarette smoking cessation among smokers with no initial plans to quit smoking, multi-national longitudinal study in @AddictionJrnl finds. https://t.co/BrdXBzZ0TA

In 2019, 20% of teens vaped at least once in the past 30 days. This year it’s 9.4%. And cigarette smoking among teens is almost extinct–likely due to vaping. That’s not the story the Public Health organizations choose to tell though. CASAA director Jim McDonald reporting for Vaping360.

READ MORE: In 2022, Kids Are Back in School but Vaping Barely Ticked Up

It’s not surprising THR advocates and adult vapers weren’t invited. What’s SHOCKING is the blatant collusion between CDC researchers/officials and anti-vaping groups to continue the youth vaping “epidemic” lie; disregarding the lives of the 43 million+ adults who smoke and vape. We highly recommend reading the Twitter thread below and watching the eye-opening Zoom meeting video in full.

🚨🔎🚨
Earlier today, @CDCTobaccoFree held a zoom call to coordinate the spin on its latest youth vaping data with its prohibition cronies like the Potemkin parents and TFK. AVM obtained the link and so did a number of other *unapproved* stakeholders. Let's have a look.
THREAD 🪡

Advocates will be pleasantly surprised to see the editorial board of a mainstream media outlet reporting the truth about adult flavor preferences, the consequences of bans and sensible responses to teen vaping. Kudos to the San Diego Union-Tribune Editorial Board for getting it right!

I had to double take seeing a verified news org reporting common sense regarding vaping. Love to see it!

FDA // Is Someone Lying?

FDA bragged that its Center for Tobacco Products had issued marketing denial orders to Hyde after “conducting its scientific review,” but the company claims it only received a Refuse to Accept letter, which are issued WITHOUT any scientific review. A few days later, the FDA responded that the agency issued BOTH.

Did FDA Lie About Issuing an MDO for Hyde Disposables? https://t.co/muizD4pWWr via @vaping360

I used to blaze the shit out of cigarettes when I was like 14, now kids think cigs are disgusting and literally judge people who smoke. Times have changed so much since I was a kid. And for the better. I think vaping has a lot to do with this drop in kids smoking cigarettes.

READ MORE: E-cigarette use among kids and teens is an ‘urgent’ problem, organization says

It’s virtually impossible to “play by the rules” because the rules are purposely designed to clear the market of adult consumer favorites and shut down businesses.

Neither Senator Durbin nor FDA care about protecting actual consumers. They only want to prevent new vapers. It’s mindless handwringing that will only serve to keep people SMOKING and create new CIGARETTE consumers.

Your mission is to “promote consumer welfare by improving the understanding & impact that public policies & regulations have on American consumers.”

Do YOU not understand that “consumers” here is NOT <2.6 million experimenting teens? It’s 43 MILLION ADULTS who smoke or vape.

On this week’s Twitter Space the panel chatted with Amanda Wheeler and Tim Andrews, who are on the road right now with the We Vape We Vote ’22 Tour! Also available on CASAA’s Spotify channel (above.)

Join us TODAY at 3:00 PM Eastern/2:00 PM Central as we chat with @amandawheeler32 and @Tim_Andrews, who are on the road with the @SaveVape tour!https://t.co/2dZJ96oAZB

This week, join Alex and Logan as they speak with tobacco harm reduction advocate Dr. Marewa Glover about the public health goal to make her country smoke-free by 2025 and how policy makers think they’re going to get there.