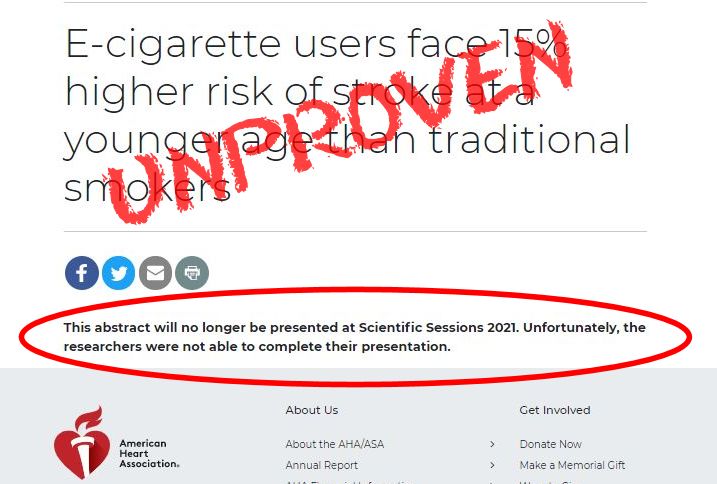 No longer raising taxes on combustible tobacco products, the NEW VERSION of the Build Back Better funding bill only targets ANY TYPE of nicotine used in harm-reducing products at $50.33 per 1,810 mg!

CASAA president Danielle Jones and CEO Alex Clark took part in sCOPe, THR advocates’ and consumers’ response to being left out of the tobacco control debate and decision-making at the Ninth Session of the Conference of the Parties (otherwise known as “COP9”) of the WHO Framework Convention on Tobacco Control (WHO FCTC).

its been 16 months since the Massachusetts flavor ban and though I'm still vaping flavored e-liquid sadly i don't know for how much longer ill be able to get it. still trying to figure out why @CharlieBakerMA thinks it was a good thing. #vapefam #vapingsaveslives

A new (not yet peer reviewed or published, according to a UPI report) study claims vapers are more likely to suffer a stroke at a younger age than people who smoke. Let’s break down all of the problems with this claim:

1) It’s a cross-sectional study. Meaning it’s looking at the stroke patients at specific points in their lives rather than following them over a period of time.

Why does this matter? Well, imagine if researchers were looking into car safety and studied people who had ever had a car accident in their past. They check DMV records to establish what car they were driving between 2015 to 2018. Can they determine from only that info what car was involved when the person actually received the injuries?

Dr. Leonie Brose, smoking expert at King’s College London points out, they used is a cross-sectional survey. “This means respondents had a stroke in the past (maybe years before they completed the survey) and were using e-cigarettes or smoking at the time of the survey….””…At least some of the strokes would therefore have occurred before e-cigarette use. The strokes then could not have been caused or made more likely by e-cigarettes.”

2) Former smokers still have a higher risk of stroke for years after quitting. There was no information as to whether or not those who were vaping between 2015-2018 were previously smoking, how long they smoked before they switched to vaping or how long they’d been vaping.

3) There was no control group in the study, meaning the researchers were unable to establish whether vapers were more or less likely to suffer strokes than the general population.

4) There was no data on the type and severity of strokes suffered, or on whether participants had other conditions such as high blood pressure, diabetes or alcoholism, which can also significantly (and are more likely to) increase the risk of stroke.

5) Nearly 7% of people smoking had a stroke (at some time in their life) compared with 1% of e-cigarette users and 4% of people who were dual users. How likely is it that the vapers who were so much less likely to have a stroke would have increased risk at a younger age?

When researchers found that vapers were 15% more likely to suffer a stroke in middle-age than people who were smoking, that should have thrown up a red flag to take a closer look at the data and other possible factors. Yet, they didn’t. 10/11

In summary, contrary to the headlines, the study didn’t show that vaping had anything to do with causing strokes, let alone causing more strokes in younger people than smoking.

Remember that obviously flawed story about vapers getting strokes at an earlier age than smokers?

Hopefully, Mail reporter @lukeandrews_a will find out what's going on.

Note: On November 12, 2021, it was discovered that the study had been pulled from presentation at the AHA Scientific Sessions 2021.

In an explosive letter circulated on November 8th to members of Congress, Associate Professor Michael Pesko (considered the US’s leading authority on e-cigarette policy evaluation research) detailed what extensive research (funded by NIH) shows would be the effects of the Democrats plan to tax e-cigarettes – and the results are truly scary.

Overall, my scientific opinion is that raising taxes on e-cigarettes and smokeless tobacco products to levels equivalent to cigarettes will increase cigarette use across all populations and cause significant public health harm.”
~Michael F. Pesko, Ph.D.

Tell your representatives in Congress to FOLLOW THE SCIENCE established by Dr. Pesko and his colleagues, and remove the nicotine tax from the Build Back Better Act!

I don’t doubt that much of the FDA’s opposition to smoke-free products is driven by the federal government’s obsession with a “tobacco-free society”, however, the vaping community should find some solace in the fact that confusing communications, “criminal” treatment, shifting guidance, and decision paralysis are cultural and behavioral norms at this federal regulatory agency.”
~ Dr. Brad Rodu