HB 3615 would DELAY the JULY 2022 ban of vape products without submitted PMTAs, so adult consumers would have access until 2023.

Call and send a message TODAY to your representative urging them to SUPPORT HB 3615!

No vote was taken on SB 367–a flavor ban in nicotine limit bill–Monday but we anticipate it will go through committee with little resistance, so contact your lawmakers in Connecticut NOW and urge them to reject SB 367!

HB 1570, yet another ill-advised FLAVOR BAN bill, had a hearing on March 18 at 1:31 PM. Click link to find out how to register or testify your opposition to this bill!

This bill had a hearing on Wednesday, March 9, 2022. Click the link for more info!

Some may think restricting sales of vapes to adult-only establishments “fixes” the bill, but if you 100% advocate for Tobacco Harm Reduction, you know far safer vape sales should NOT be restricted in any way when cigarette sales are not!

Vaping has contributed to adult smoking dropping in Iceland from 14% in 2018 to 7% today. Youth smoking is under 2%. Yet lawmakers inexplicably claim vaping is somehow a threat to youth, and seek to make it less appealing and less effective for adults.

Iceland: "While the architects of the new law may have good intentions, they need a better grasp of these realities … As it stands, the legislation risks counteracting years of Icelandic progress.", via @Filtermag_org https://t.co/ys2GcBQ5TH

Did this study find that vaping is a “gateway” to cannabis use for youth with a particular mental health status? No, it did not. The data from a longitudinal survey cannot determine a causal effect and “common liability” can’t be ruled out.

Not being highlighted is how researchers were surprised their theory that youth with more severe IMH problems who vaped nicotine would be more likely to later use to cannabis, but they were actually LESS likely to use cannabis than those with low severity IMH. Is it possibly even preventative??

A new study led by @PHGSU researchers has found that mental health status significantly affects whether adolescents who use e-cigarettes will begin using cannabis: https://t.co/N1j4v0aGPB pic.twitter.com/lzEPDeq922

READ MORE: Are E-Cigarettes a “Gateway” to Cannabis Use Among Adolescents? It Depends on Mental Health Status

As elsewhere, Connecticut legislators insist flavors are the root cause of the spike in teen vaping, even naming the campaign to prohibit their sale ‘Flavors Hook Kids.’ Research suggests otherwise….”

These bans may even worsen health outcomes…”
~ Sarah Wall

Using the latest CDC NYTS & NHIS data, CASAA has created these graphs for advocates showing that not only is the claim there’s a “new generation being hooked on nicotine” patently false, but for every one teen who vapes regularly nearly FIVE adults quit smoking. 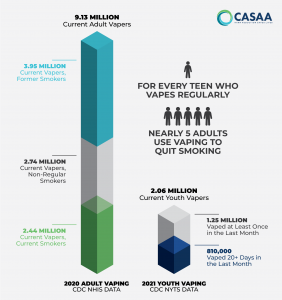 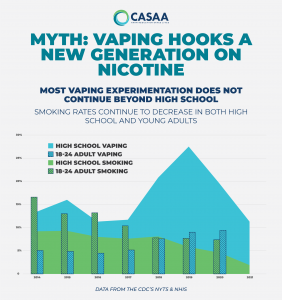 Don’t miss CASAA President Danielle Jones with Grimm Green, discussing the data, the new charts, how advocates can use them and more!

Supporters of the measure hail it as necessary to close a “loophole” that e-cigarette companies can use to evade federal regulation because the FDA’s authority over e-cigarettes was previously limited to nicotine derived from tobacco. The reality, however, is that this measure would have been unnecessary, and this loophole never used, if the FDA had only provided the e-cigarette industry with a realistic way to earn FDA approval and bring products to market legally….

In response to this development, many anti-smoking advocates abandoned the goal of reducing the death and disease caused by smoking and instead began to focus on nicotine. Despite the fact that nicotine—divorced from combustion—poses an insignificant public health risk, they set their sights on ending all recreational nicotine use at any cost, even if it meant eliminating life-saving smoking alternatives, exacerbating the problem of over-policing, or even protecting once-scorned cigarette businesses.”
~ Michelle Minton

“Unfortunately this study is seriously flawed and tells us very little. It does not provide any good evidence that e-cigarettes make quitting smoking harder…”
~Professor Lion Shahab

“This paper demonstrates that users of nicotine, an addictive drug, find it difficult to stop using it. However the relevance of the study to actually quitting either smoking or e-cigarette use is unclear…”
~ Professor John Britton

“This brief research letter does not add usefully to our understanding of the public health impact of adolescent nicotine vaping. It provides some information on quit attempts that failed but does not compare these with quit attempts that worked, so it’s not that clear what we learn from this…”
~Professor Martin Jarvis

READ MORE: Expert reaction to research letter about US adolescents attempting to quit smoking or vaping

The issue of vaping has become so intensely politicized that the so-called science swirling around it is nothing more than a pool of harmful disinformation….”

Like so many that went before it, the new Johns Hopkins study alleging a connection between vaping and diabetes bears the name of Michael Bloomberg. Vaping alarmism is unscientific and transparently political, and Bloomberg is the man behind a great deal of it.”

READ MORE: Anti-Vaping Study with Bloomberg’s Name On It

The lead author claims “Flavored tobacco products appeal to kids, lead to more adolescent tobacco use and addiction, and increase the odds of using other tobacco products like cigarettes.” Yet youth vaping/smoking in Oakland dropped from 2015 to 2017. Hmmm… 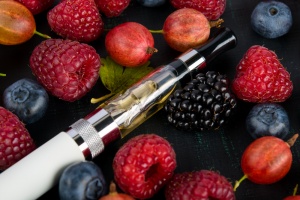 The so-called “weakness” of the San Francisco study is that the ban was “effective” in July 2018 (same as Oakland) but not “enforced” until January 2019. It’s a disingenuous argument that assumes most stores didn’t comply with the law until the city started issuing fines.

Finally, unlike San Francisco’s TOTAL ban, Oakland exempted adult-only stores–a “loophole” not closed until 2020. Put simply, this flavor ban study has a major weakness–the conclusions are based on data from a city that still legally allowed sales of flavored products.

REASEARCH // And Yet Another Study Debunked

Clive Bates’ epic takedown of a recent study falsely claiming vaping “could be a third as harmful to health as smoking.”

Oh dear… our harsh but fair review of a paper erroneously claiming that vaping is one third as risky as smoking.

Solid case for retraction. Authors’ response will be welcome. https://t.co/x9daZHk7zP

READ MORE: Review of: Improving on estimates of the potential relative harm to health from using modern ENDS (vaping) compared to tobacco smoking