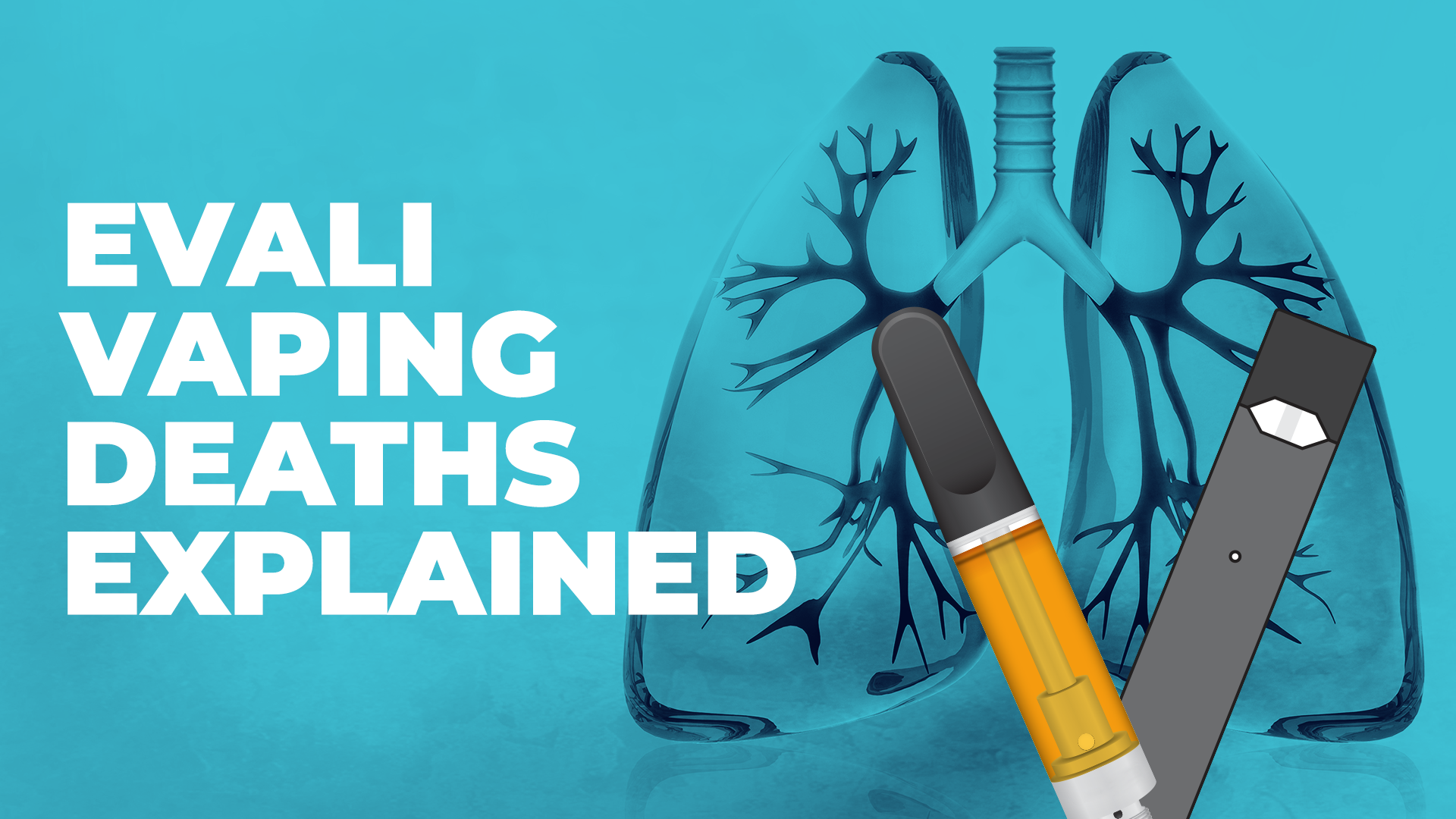 What You Should Know About E-cigarettes and EVALI 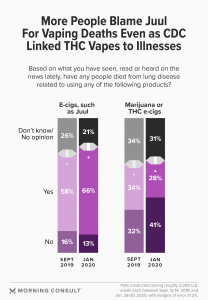 A January 2020 poll by Morning Consult of 2,200 adults found that 66% mistakenly believe that nicotine e-cigarettes are the cause of the EVALI outbreak.

Despite the fact that the CDC announced January 16, 2020 that the strongest link to the outbreak was illicit THC vapor products tainted with vitamin E acetate, the number of adults who believe nicotine products are the cause has risen 8 percentage points since the height of the outbreak in September 2019. Here’s what you need to know about EVALI.

What does EVALI mean?

EVALI is an acronym for “E-cigarette or Vaping Associated Lung Injury.” The term was coined by the CDC after an outbreak of lung injuries in late 2019 that appeared to be linked to patients having a history of vaping nicotine, THC or both.

The vast majority of patients with EVALI had non-fatal symptoms, including shortness of breath, chest pain, cough, nausea, vomiting, fever, and weight loss. Studies showed that most of the people who died already had pre-existing conditions and risk factors, such as older age, obesity, or CVD or COPD. As of February 18, 2020, a total of 2,807 hospitalized EVALI cases were reported to CDC, including 68 deaths.

How is EVALI diagnosed?

There is no single test for EVALI; it’s what is known as a “diagnosis of exclusion,” which means that a doctor will conduct tests to rule out other potential diseases and conditions. It can be challenging because the symptoms are similar to those of other respiratory illnesses, like pneumonia and even the seasonal flu or COVID virus.

A doctor will begin their diagnosis by asking about vaping within the past three months and whether the product contained nicotine, THC, or both. A chest X-ray or CT scan is usually necessary for diagnosis and will show hazy looking spots (called opacities) in the lungs.

When and where was the outbreak?

The first cluster of cases was identified in southeastern Wisconsin on August 1, 2019, quickly followed by more cases in northern Illinois. The CDC subsequently received reports from all 50 states, DC, Puerto Rico and U.S. Virgin Islands. The outbreak peaked in the US in mid-September 2019 and then declined significantly in the following months. CDC has not updated its case reports since February of 2020. However, some states are still reporting occasional cases. For example, local health departments in California have reported 39 cases (with 1 death) since March of 2020.

Very few cases occurred outside of the USA, with 19 cases reported to the Public Health Agency of Canada, one in Belgium and one in France. The WHO’s (World Health Organization) advisory committee on the outbreak also pointed to isolated cases in Japan, Mexico and the United Kingdom, though some of these reports predate the description of EVALI.

Why do researchers think this outbreak is related to vaping?

In these cases, the patients involved reported a history of vaping, and testing found no evidence of a known illness or disease that could explain the symptoms. The correlation of current or past vaping among these patients was strong evidence that something in the vapor products might be causing the illness.

What type of vapor product were the patients using?

The CDC investigation found that 82% of the patients self-reported using THC (tetrahydrocannabinol, the main psychoactive chemical in cannabis) products, while 14% self-reported only using products containing nicotine. Of those reporting vaping THC products, 78% reported acquiring products only from informal sources (family/friends, dealers, online, or other sources).

Patients used many different brands and products, so the outbreak has not been narrowed down to a specific brand or product.

In late August 2019, the cannabis publication Leafly published an investigative report on the practice of using vitamin E acetate, a thick substance that had recently become popular with illicit THC vape manufacturers as a cutting/diluting agent. The viscosity of vitamin E acetate hid from consumers that the THC oil had been diluted, allowing manufacturers to charge high prices for less pure product.

Soon after the Leafly article was published, on September 6th, the FDA issued a statement warning consumers to stop using vaping products containing THC and vaping products of any kind obtained off the street or from unknown sources. On the same day, the CDC was still “recommending individuals consider not using e-cigarettes.” A month later, in November 2019, the CDC finally announced that “CDC’s Dr. Peter Briss & the Lung Injury Response Team” had “identified the chemical compound responsible for the outbreak.” Ironically, they later received an award for “their” work.

After warnings about vitamin E acetate in illicit THC vapes were made public and police shut down a huge THC vape manufacturing operation in southern Wisconsin in September 2019, cases of EVALI dropped off dramatically.

Furthermore, in a study published in February 2020, Vitamin E acetate was also identified by researchers in 94% of the lung fluid samples obtained from 51 case patients in 16 states, but was not found in lung fluid obtained from a healthy comparator group. Additionally, among the case patients for whom laboratory or epidemiologic data were available, 94% had detectable THC or its metabolites in their lung fluid or had reported vaping THC products in the past 90 days. Nicotine or its metabolites were detected in only 64% of the case patients. However, to date, no nicotine vapor product has been found to contain vitamin E acetate or any other toxin that would cause the similar adverse effects.

It should also be noted that vitamin E acetate is an oily chemical that is insoluble in water, while nicotine vapor products use water-soluble ingredients, which makes the two incompatible. Taken together, the vast majority of the evidence points to illicit THC vapes containing vitamin E acetate as the cause of EVALI.

What is vitamin E acetate?

Vitamin E is the common name for several similar types of chemicals called “tocopherols.” Chemists extract oils from plants and then fractionate (similar to distilling alcohol) tocopherols from the oil. Vitamin E acetate, also known as “tocopheryl acetate,” is a synthetic form of vitamin E. It is often found in skin care products and dietary supplements. While vitamin E is claimed to have antioxidant properties for skin, it has not been studied for inhalation.

Why is vitamin E acetate being used in vapor products?

THC vapor products are filled with a liquid that consists of cannabinoids (including THC,) terpenoids (aromatic oils) and flavonoids (pigments) that have been extracted from marijuana flowers. According to Leafly.com:

Pure THC extract is a thick amber oil, and traditional THC oil cutting agents thin the oil. In response, customers learned to detect cut oil by flipping over vape cartridges to see how the air bubble moves inside the tank—much like the bubble in a carpenter’s level. A fast-moving bubble means the oil had been thinned with a cutting agent and wouldn’t deliver the high THC potency a consumer desires.

No. The ingredients of commercially-available nicotine vapor products may include: propylene glycol, vegetable glycerine, food-grade flavorings and USP-grade nicotine, but they do not contain vitamin E acetate. Nicotine vaping liquids are alcohol-based and water soluble, not “oil.” Nicotine strengths are adjusted by using more or less propylene glycol or vegetable glycerine. There is simply no cost benefit for manufacturers to use vitamin E acetate in nicotine liquids. In fact, oil-based liquids are not even compatible with devices designed to vaporize water-based nicotine liquids.

Why does vitamin E acetate harm the lungs?

Researchers and medical professionals aren’t exactly sure why, but they have some theories. For example, tocopherols adhere to the lung surfactant, which is a fluid that lines the surface of the lungs. The fluid allows oxygen to transfer from the air into the rest of the body. Tocopherols can block that transfer from happening, causing the difficulty in breathing.

Are THC vapor products commonly referred to as “e-cigarettes” by the THC vapor industry or consumers?

No. Cannabis and THC vapor products are most commonly referred to as “vape pens” or “vape carts” (short for “cartridges.”) The term “e-cigarette” is almost exclusively used to refer to nicotine vapor products.

Commercially-available nicotine vapor products don’t contain vitamin E acetate, so how are they linked to EVALI?

Although reporters, cannabis industry experts, vaping advocates, bloggers, doctors, and non-CDC researchers around the country raised alarms over vitamin E acetate for more than two months before CDC decided to specify the substance in its alerts – and even after that – the agency continued to warn that other constituents in cannabis and nicotine vapes might be at fault and refused to remove “e-cigarettes” from the name.

Furthermore,  language on the CDC EVALI web page continues to confuse the public by using the terms “e-cigarette” and “vapes” interchangeably, leaving the impression that THC and/or vitamin E acetate is commonly found in nicotine vapor products.  Although both nicotine-containing and THC-containing vapor products are both referred to as “vapes” and “vaping,” only nicotine-containing products are referred to as “e-cigarettes” by both the industries and consumers.

At the same time, anti-harm reduction groups and politicians jumped on the opportunity to place blame for EVALI on nicotine products – especially JUUL –  in order to pass laws and flavor bans. To this day, these organizations, anti-vaping researchers and media outlets continue to implicate nicotine vapor products in the EVALI outbreak.

For most of the outbreak medical professionals and the CDC have relied on self-reported information from the patients to determine what products were being used. CDC reports that in 14% of the suspected EVALI cases, patients reported that they did not use THC vapor products and exclusively used nicotine vapor products.

However, in many of these cases, patients who denied using THC either eventually admitted to using illicit THC products, were found to have THC in their system or THC products were found in their home by friends or family members. CDC has acknowledged that many may have feared legal repercussions of admitting to using an illegal substance.

Furthermore, the CDC has not reported any contaminants found in commercially-available nicotine products used by the suspected EVALI patients. The products the patients used contained the same ingredients as products used by millions of unaffected vapers. This raises serious doubt as to whether nicotine products can be implicated in the outbreak at all. Those who claimed to have not used illicit THC vapor products are more likely either misleading authorities about their use, or their condition is unconfirmed as EVALI.

Why did the CDC emphasize “e-cigarettes” instead of tainted, illicit THC vapor products when naming the outbreak?

Because so few cases have involved exclusive use of e-cigarettes, it is unclear why CDC chose to emphasize the word “e-cigarettes” when naming the illness. Some suspect it may have been intentional to conflate the outbreak with commercial nicotine vapor products as an attempt to reduce youth experimentation. Others believe it was simply a lack of understanding popular terminology on the part of agency officials. Unfortunately, we may never know.

In January of 2020, the CDC finally moved away from the broad recommendation that people consider refraining from vaping altogether. The web site currently advises that youth, pregnant women and non-tobacco users shouldn’t vape. The CDC guidance also states that former smokers using nicotine e-cigarettes should not go back to smoking.

Watch an in-depth discussion about EVALI from CASAA