Data from Minnesota suggests vaping laws and taxes are stalling adult smoking declines. CASAA in action with CAPHRA Voices4Vape video. Excellent, “must-read” article by Marc Gunther at The Chronicle of Philanthropy. Public health policies that are bad for public health. New US Surgeon General and more!

If you’re wondering why veteran THR and vaping advocates are disgusted with the reinstatement of Vivek Murthy as Surgeon General, read this 2016 Clive Bates blog post about his last failed attempt at doing the job with reason, common sense and actual science.

As we welcome @vivek_murthy back to his role as @Surgeon_General, here's a reminder of just how wrong he has been about tobacco harm reduction.

On his vaping SG report: https://t.co/vsxggiLQD6

Must do better this time.

Chicago mayor Lori Lightfoot continues to push “quit or die” ideology on her constituents who smoke, first trying to eliminate any incentive for switching to vaping – incl. flavor & use bans & huge tax – then ignoring CDC vaccine guideline to prioritize people who smoke.

Almost every white privileged person, and some brown privileged people, I know, have jumped the line to get vaccinated early. Why are they making it harder for people with lung issues that are following the rules?

READ MORE: City snuffs out smokers, says they won’t have priority for vaccine

These radical members of Congress just asked @FDATobacco not to do exactly what Congress explicitly required it TO do. Such a change in law, even if enacted by Congress, would cause more smokers to die and would create a blackmarket for ecigs.
https://t.co/DJhFp1nTk9

Michigan lawmakers are banning Vitamin E acetate (VEA) in vapor products, despite the fact that VEA was found mainly in unregulated products that are already illegal to sell. This law is about as logical as banning talcum powder in cocaine. They also misleadingly include nicotine products that never used VEA. Not only would the oil-like substance damage nicotine vaping devices, the VEA in illicit THC products was used to mislead customers that the THC oil was undiluted, which is a deception that is completely unnecessary for legal nicotine vapor products.

It's really not a problem for anyone, it's just a waste of time and tax dollars. As Vit E Acetate was only used to cut black market THC carts, no legal products, THC or otherwise are affected. The black market isn't likely to comply with the law for obvious reasons 🙂

Nah, that's the Michigan governor that wants to kill the industry. This is just a feel good bill to ban the sale of cartridges with vitamin E acetate, which has only ever been found in illicit THC cartridges.

IN THE NEWS // Exposing Anti-Vaping Bias

The most significant takeaway (for THR advocates) of this article is that chart (based on ALA/CDC data) showing cessation was clearly stalled until vaping gained popularity in 2009, but rather than given credit, is instead blamed for “reversing gains.” 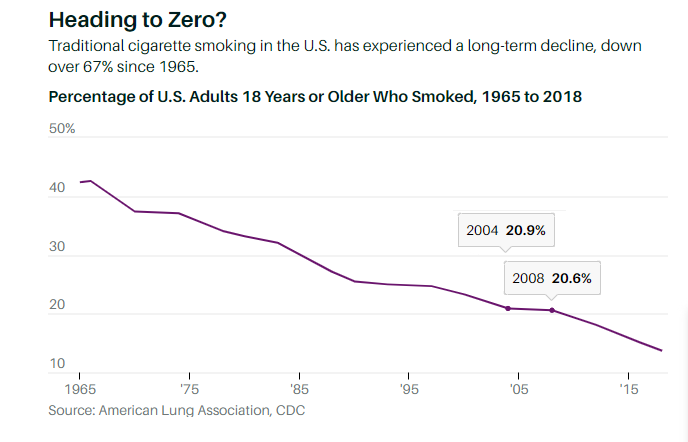 READ MORE: How the Big Tobacco Giants Can Survive the Last Smoker

Check out our highlights below, then go read the full article!

Bloomberg Philanthropies used its money and influence to curb vaping, to be sure. But others who have worked for decades to reduce deaths from smoking say the ongoing campaign against e-cigarettes is misguided, built on unsound science and likely to do more harm than good.”

“By contrast, the British government actively promotes vaping as an alternative to smoking while discouraging use by young people. This strategy seems to be working: Use of e-cigarettes is largely confined to current and former smokers.”

“Simple in theory but controversial in practice, harm reduction aims to limit the dangers of risky behavior….Harm reduction can be useful when the evidence suggests, as it often does, that abstinence-only strategies like “just say no” don’t work.”

“Tobacco-Free Kids…has about 140 staff members and a budget of $34 million…Truth Initiative spends about $100 million a year…Bloomberg…has committed nearly $1 billion…The lung and heart associations and the cancer society all get grants from Bloomberg….”

“Bloomberg: “Just think if your kid was doing this and winds up with an IQ 10 or 15 points lower than he or she would have had for the rest of her life.”

This is, to be kind, a stretch. No reputable scientist believes that e-cigarettes cause a long-term drop in IQ.”

“That is a good illustration of the danger of Bloomberg and his money,” says Clive Bates…David Abrams, former Truth Initiative scientist…says: “It’s never justified to distort or misinform the public, even in the service of trying to scare kids.”

“FDA-approved nicotine-replacement therapies, after all, deliver nicotine…to smokers who want to quit….Michael Russell, a British scientist and a pioneer of smoking-cessation treatments, famously said: “People smoke for nicotine, but they die from the tar.”

“The two sides can’t even agree about whether the use…by kids should be called an epidemic. A 2020 survey found that about 1 in 5 high-school students reported vaping in the previous month, but only about 1 in 15 frequently used e-cigarettes…Is that an epidemic?”

“With a presence in every congressional district, the Cancer Society can “mobilize our grassroots volunteers and encourage them to contact their elected officials,” [Cathy Calloway, director of state and local campaigns at the Cancer Action Network] says.”

~ Marc Gunther, The Chronicle of Philanthropy

READ MORE: Bloomberg’s Millions Funded an Effective Campaign Against Vaping. Could It Do More Harm Than Good? (Registration is FREE!)