On May 18th, CASAA solidified its positioning statement and submitted its comment to the FDA regarding 22nd Century’s “Modified Risk Tobacco Product Applications for VLN™ King and VLN™ Menthol King combustible cigarettes. The “plant biotechnology company,” which focuses on reduced nicotine tobacco and hemp/cannabis plant genetics, has filed a modified risk tobacco product application (MRTP) seeking authorization from the FDA to market its very low nicotine cigarette brand, VLN™, as containing “95% less nicotine.” 22nd Century is also seeking to claim that their very low nicotine cigarettes can “help you reduce your nicotine consumption.” 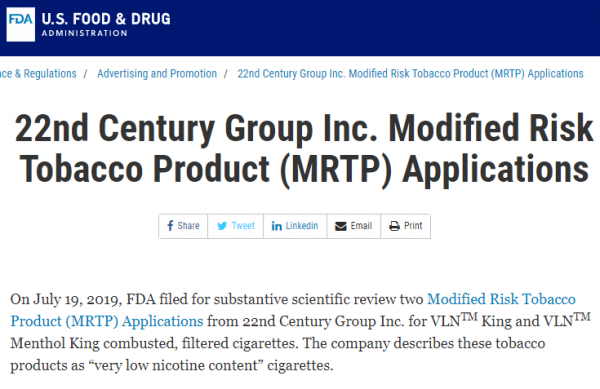 CASAA is urging the FDA to reject 22nd Century’s MRTP application on the grounds that claiming VLN™ cigarettes “can reduce nicotine consumption” will mislead consumers to believe that VLN™ cigarettes are an approved smoking cessation strategy or therapy. Any company claiming that a product can help reduce nicotine consumption is making a health claim which can only be made for products approved as a therapeutic drug or device, such as nicotine patches or gums. 22nd Century has not provided the required scientific data to support such a claim, nor is the company seeking approval as a nicotine replacement therapy (NRT), or even as a less risky cigarette.

Additionally, singling out relatively benign nicotine in cigarette smoke sends a confusing and dangerous message to consumers; a majority of whom are already misinformed about the low risks associated with nicotine. In highlighting reduced nicotine exposure, the claim would reinforce public misconception that nicotine is a significant — if not major — factor in smoking-related illness. Although the proposed label includes the warning that “Less nicotine does NOT mean safer. All cigarettes can cause disease and death,” the bulk of the advertising message that would be seen by the public would clearly imply that lowering nicotine intake — even while still exposed to the known toxins released by combustion — is somehow “better” and many will believe that to mean “safer.” This would not benefit public health.