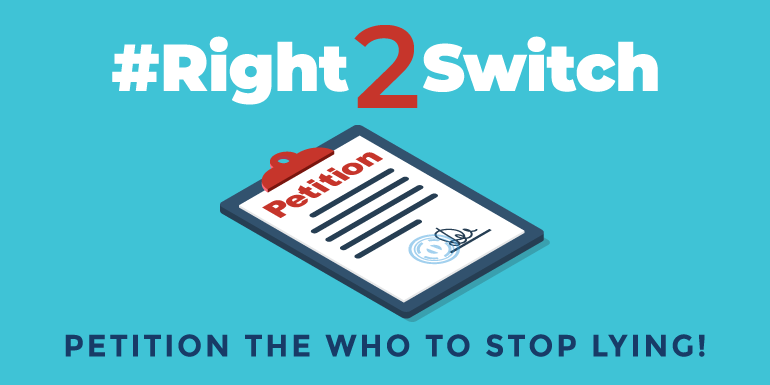 Petition the World Health Organization to Stop Lying About Vaping!

In 2006, the World Health Organization (WHO) developed the Framework Convention on Tobacco Control (FCTC) in order to promote policies to member countries with the aim of reducing tobacco use. Representatives of member countries meet every two years to discuss improvements and implementation of the FCTC. This meeting is known as the Conference of Parties (COP), and the ninth such meeting, COP 9, will occur between November 9-13, 2021.

The WHO is recommending extreme measures like high taxation, flavor bans, and outright prohibition as their preferred actions to curb the adoption of these safer nicotine products. To put a finer point on it, the WHO’s influence is being disproportionately leveled at low- and middle-income countries (LIMCs) which are home to more than 80% of the world’s population of people who smoke.

Prior to COP 9, CASAA is encouraging our US membership to sign the international petition below demanding the following things from the WHO:

The FCTC includes a definition of “tobacco control” that acknowledges harm reduction as part of an overall strategy to reduce the early death and disease attributed to smoking. But so far, policy recommendations coming from the WHO are focused on coercive, top-down interventions that ultimately take options and resources away from people who smoke.

Please take a moment today to sign the petition and urge the WHO FCTC to honor its own mandate by following the science and including harm reduction strategies to improve global public health.