HB 211 will impose a 5¢/mL tax ($5 per 100 mL bottle) on e-liquid containing nicotine! Hearing is scheduled for Monday, April 12, 10:00 AM. CASAA has made it easy to oppose this tax. Just click the link and follow the instructions!

DO MORE: If you live in Texas, join the CASAA Texas Facebook Group

Governor Evers is back on his mission to stop people who smoke from switching to safer vapor products by increasing the cost with a 71% tax (including devices) plus tricking the public into believing vapor harms bystanders by banning public use. Vaping consumers must show up at budget hearings to oppose! Take action now!

WISCONSIN: (HEADS UP!) Gov. Evers is back on his mission to stop people who smoke from switching to safer vapor products by increasing cost with a 71% TAX (incl. devices) PLUS a public USE BAN. Vaping CONSUMERS must show up at budget hearings to OPPOSE!https://t.co/bZhYqfH07u

READ MORE:  Wisconsin – Stop a Vapor Tax and Use Ban!

DO MORE: If you live in Wisconsin, join the CASAA Wisconsin Facebook Group

HB 110 would enact a whopping 75% wholesale tax on e-liquids, #vaping devices, and components. There was a hearing on Friday, April 9th. Click the link for the current information and then TAKE ACTION!

Support HB517, preventing local governments from passing laws and taxes that are WORSE than what is law at the state level. A public hearing took place on Wednesday, April 7th. Click the link for current information and then TAKE ACTION!

DO MORE: If you live in Missouri, join the CASAA Missouri Facebook Group

Council President Tom Hucker has proposed DOUBLING the county’s excise tax rate on vapor products from the current 30% to 60%. PUBLIC HEARING on April 27, 1:30 p.m. If approved, would go into effect on July 1st!

Cigarette sales have strengthened wherever nicotine vape taxes were increased.https://t.co/AVl0YwHsVd

Sort of bonkers though, if you want to reduce horrible death from cancer, heart and lung disease.

DO MORE: If you live in Maryland, join the CASAA Maryland Facebook Group

COMMENTARY // State Bans on Tobacco Products Are a Disaster

As with all attempts by government officials to legislate morality, state bans…not only fail in their primary objective, but have knock-on effects likely to put the health of their residents in greater jeopardy.”
~ Katherine Revello

READ MORE:  State Bans on Tobacco Products Are a Disaster

COMMENTARY // Teen Vaping Is Bad. So Are Many Ad Campaigns Against Teen Vaping

In light of recent anti-vaping campaigns aimed at teens, this article by Corbin K Barthold for Forbes Magazine from 2020 is even more relevant. Especially this point about relative harms. 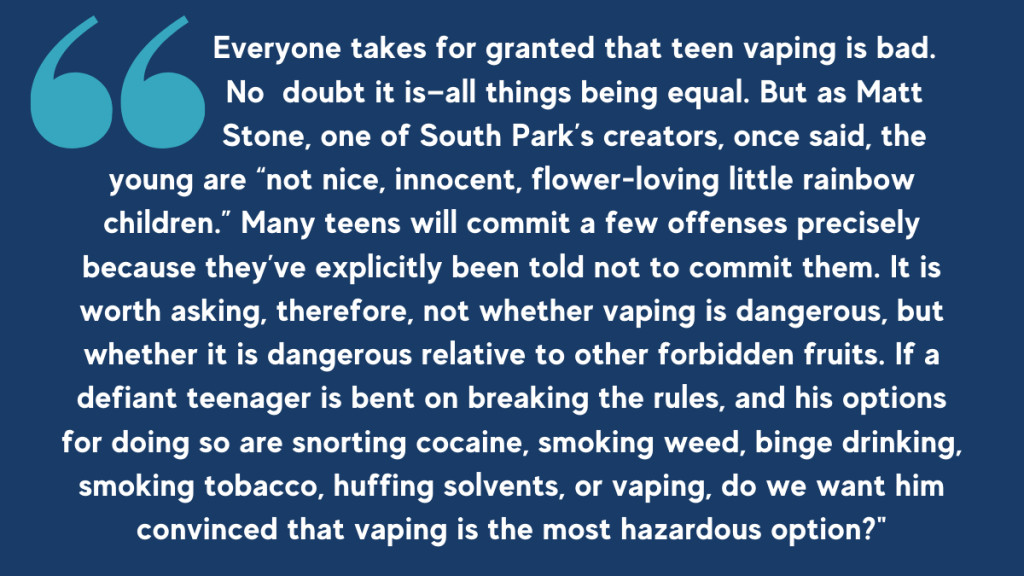 In my opinion some ad campaigns have lead teens to try thing they normally wouldn’t. Great article! Teen Vaping Is Bad. So Are Many Ad Campaigns Against Teen Vaping. via @forbes https://t.co/0tipArIhJV

READ MORE:  Teen Vaping Is Bad. So Are Many Ad Campaigns Against Teen Vaping

COMMENTARY // Vaping Prohibitionists Host Conference to Confirm Their Own Views

“Groups like PAVE and CTFK can never be satisfied. Their goal—eradicating nicotine use from the globe—is no more reachable than the drug-war mirage of a “drug-free world.” And as tobacco harm reduction technology expands, so does their mission….

“Completely absent from the conversation, of course, were tobacco harm reductionists and adults who used vapes to quit cigarettes.” ~Alex Norcia, Filter Magazine

"Groups like PAVE and CTFK can never be satisfied. Their goal—eradicating nicotine use from the globe—is no more reachable than the drug-war mirage of a 'drug-free world.'"
https://t.co/jRpyIM1e4t #HarmReduction #VapingSavesLives

Dr. Scott Magley, medical director for the emergency department at Conemaugh Miners Medical Center in Hastings, PA, implies smoke-free tobacco is “as dangerous as smoking” (not even close!) and cessation counselor Diana Mihalcik, youth services coordinator with Adagio Health, unethically and irresponsibly tells the outrageous lie that nicotine is “the most dangerous component of tobacco.” Such claims confuse the public about the continuum of risk with tobacco products, undoubtedly leading people who smoke to wrongly believe that there is no benefit to switching to smoke-free products. 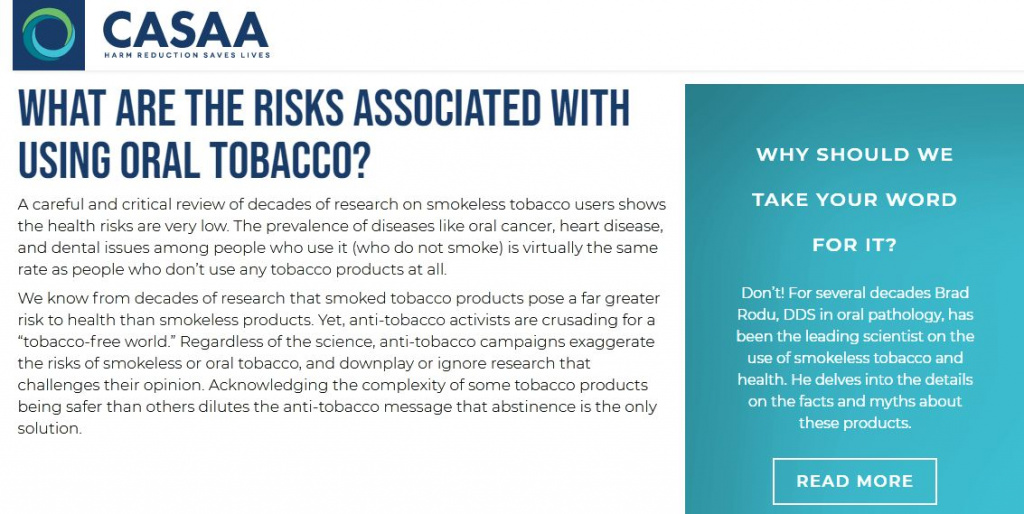 READ MORE:  Chew on this: Doctors warn of cancer, other health issues linked to smokeless tobacco use

FDA’s “The Real Cost” anti-vaping campaign jumps the shark with a new Marvel  “Reefer Madness” reboot–animated comics turning vaping into a cool new supervillain. Now the other 80% of kids who’d never thought about vaping will certainly be curious! 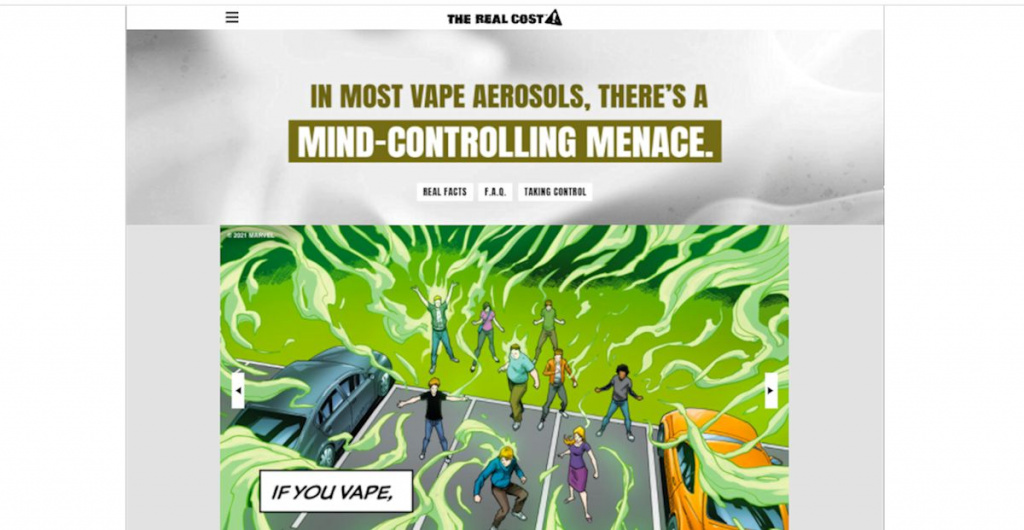 The FDA and Marvel have joined together to make a new supervillain, "The Mind Control Menace." It's a monster trying to infect an entire high school. You know, a metaphor for vaping. https://t.co/kIMPO0zwUt

Public use bans are pushed using half-truths and truth twisting, such as the many found in this article. This is a major reason why CASAA opposes public use bans. If the public believes these lies, they’ll easily agree to OTHER bans & taxes, based on those lies!

PHE’s 2018 evidence review found that to date, there have been no identified health risks of passive vaping to the health of bystanders.https://t.co/dZ7TqwGaYb

A short video produced with support from Public Health England, from a few years ago. The UK government promotes nicotine vaping for adult smokers.https://t.co/V7uDuIkWZb

Something else to think about: NRTs were deemed “effective” by the FDA because clinical trials saw a small number of subjects quit for “months.” However, many relapsed after a year, often needing several more attempts to quit or giving up on quitting altogether. On the other hand, vaping helps people STAY smoke-free for YEARS and many who switch even report “accidentally” quitting smoking!

This study misidentifies THC vapes as “e-cigarettes” in music videos, then observes the fact that people who have purchased or used a product are better at “recalling” videos that feature that product than people who have not. There is a common, well-known occurrence that psychologists call the Baader-Meinhof phenomenon.  It’s often experienced by people who buy a new car and then suddenly seem to see that model everywhere. However, researchers ignore this known phenomenon, instead suggesting their findings somehow show that “restricting electronic cigarette product placement in music videos…could reduce vaping among an age group that the electronic cigarette industry regularly targets.”

Of the two brands cited, one was a dry herb vaporizer (Bad Bunny) and the other was a company that also clearly markets their products for THC use (DJ Khaled with KandyPens). https://t.co/Jq0wiOHwMn

#DidyouKnow when you buy a new car. Your #mind will see that car everywhere. That is called Baader-Meinhof phenomenon; or frequency illusion. Ur brain has taken note of your new car, now it alert you when it is seen everywhere. pic.twitter.com/QAYLCG52WZ

A preemption bill designed to block local governments from passing unscientific and baseless vapor regulations and taxes failed to pass in the state Senate, then gets revived the next day.

"Local control is getting way out of control. … We came in here and said 'Things have gone too far.' And that's one of the principles we're here to make sure that doesn't happen," said Ellsworth, R-Hamilton. https://t.co/nncQHCEBSn

City bans vapor flavors “specifically targeted at youth” which, ridiculously, means ALL flavors that don’t taste of tobacco or menthol, regardless of “youth appeal.” Flavors that are helping ADULTS avoid relapsing back to smoking!

Prior Lake bans sale of flavored vaping products – Another MN city embraces prohibition instead of harm reduction https://t.co/mT3Ckdz32e via @PLAmerican

The CDC “Tips” campaign is looking for people who have quit smoking AND been diagnosed by a doctor with a “smoking-related” health condition. While it’s a long shot, we strongly encourage vapers who fit the criteria to submit their story! (If you’re selected, you could receive a check for $2,500!)