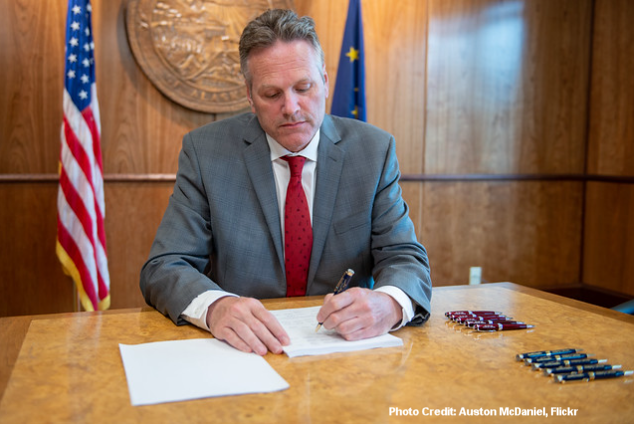 In a letter dated Sept. 8 to the president of the Alaskan Senate, Gov. Mike Dunleavy indicated he has vetoed Senate Bill 45, which would have added a 35 percent wholesale tax to vaping products and severely restricted shipping options for Alaskan vapers. The bill also harmonized the state minimum age to purchase tobacco and vaping products with federal law.

Dunleavy said in his letter to the Senate that “a tax on the people of Alaska is not something I can support.”

“Most if not all of the agreed practices listed in the settlement have been standard at Juul for years, and some others have been federally prohibited since 2016…

“Juul withdrew most of its flavored products…more than a year before the FDA mandate.”

1/Epic twitter thread on the JUUL settlement b/c, after years of looking at MSA funding & seeing these AGs all excited to get moneys from a #THR product. I'm pissed. So let's settle in for a wild ride that'll probably end up an op-ed.

READ MORE: Juul Will Pay States $439 Million to Atone for Past Sins

Despite all tobacco control efforts, nearly 200 US teens still started smoking every day. As vaping increased, smoking declined dramatically. It’s clear to anyone not blinded by a prohibitionist agenda that teens who are vaping would otherwise be SMOKING.

However, researchers of this new study ignore those facts and choose to issue an alarmist “warning” that vaping has become a “gateway” to nicotine addiction. Not only do they exaggerate the health effects of vaping, they completely fail to compare comparatively low health risks from vaping to the known deadliness of smoking.

“There is NOT strong evidence that vaping is a gateway into smoking.

Most young people who try vaping DO NOT get addicted to nicotine. Those who vape are much less likely to be dependent than those who smoke” https://t.co/RQQlr9A4rO

Past studies have found that among non-Hispanic Black adults, lesbian and bisexual females are more likely to smoke. Despite that fact, researchers still found it “surprising” that teens in that same demographic are more likely to vape. Incredibly, they didn’t even discuss the greater risk of smoking or the possibility that vaping was displacing smoking in that group.

Just as astounding was the researchers’ best guess on why they think this group is more likely to vape: targeted e-cigarette marketing. It appears to have never crossed their minds that people who aren’t white, male and/or heterosexual may just have added stress and anxiety in their lives that may cause them to seek a temporary relief.

Of course, most tobacco control research seems to ignore this fact when pondering why people of color, LGBTQ+, women and those with lower income might want to use nicotine, because they vehemently deny there’s any benefit to the user other than relief of craving nicotine.

You can buy deadly cigarettes from any gas station, grocery or convenience store within 1,000 feet of schools and churches (and each other,) but officials in Columbia, SC have decided to limit vape shops–which are selling products that are saving millions of adult lives–mainly because they “give off the wrong image.”

Ironically, the store in the photo featured in article is not what vapers would consider a “vape shop.” Referring to smoke shops, convenience stores and even cannabis dispensaries that happen to sell vapor products as “vape shops” seems to be a misrepresentation becoming more and more common in the media today.

Four highly regarded tobacco control scholars are calling for a policy agenda on e-cigarettes that balances curbing youth use with promoting vaping products as tools that can help adult smokers switch to safer nicotine alternatives. Their agenda—which consists of making e-cigarettes more easily and cheaply available than cigarettes, but also of reducing cigarettes’ nicotine content and banning a range of flavored vaping and tobacco products—is certain to draw criticism both from anti-nicotine zealots and tobacco harm reduction proponents….

Well worth a read, for those who care about #vaping and #smokinghttps://t.co/bF8m1uzjwT

CASAA IN ACTION // Planet of the Vapes Article

Online vaping blog “Planet of the Vapes” in the UK reported on CASAA taking the Bureau of Investigative Journalism to task on Twitter for it’s irresponsible article misrepresenting the relevancy and impact of nicotine levels in IQOS.

The Consumer Advocates for Smoke-free Alternatives Association has taken the Bureau of Investigative Journalism to task for its claims about heated tobacco productshttps://t.co/r9SUvsaQ8q @CASAAmedia #vape #vapingnews #tobacco #smokefree #harmreduction pic.twitter.com/p8cCVZ8CbK

CASAA CEO Alex Clark will be a panelist at the 12th Global Tobacco and Nicotine Forum (GTNF) in Washington DC on September 28th. Started in 2008, the GTNF has become a global exchange for views and ideas between public health experts, government representatives, the industry and investors.

Excited to be heading back to #GTNF2022 in person! I'll be on a panel focusing on "The Forgotton #Smoker" between Brian King (@FDAtobacco) and @BradRodu (THR Superhero).

For health authorities to equate vaping with inhaling cigarette smoke is blatantly false and counterproductive.

“Where’s the science when lives depend on it?”

FDA reports “over 350” products passed the first stage of the PMTA process—instead of the actual number that’s closer to 5,000—perhaps in an attempt to pacify anti-harm reduction groups calling for a total ban on vapor products.

“Once again the FDA and its Center for Tobacco Products are misleading the public and press on crucial data and methods in its approval process for vaping products,” [American Vapor Manufacturers Association (AVM) President Amanda] Wheeler,  said in a statement. “The figures stated in its press release today on synthetic nicotine applications are demonstrably inconsistent with FDA letters to our own members indicating many thousands more applications successfully filed than FDA now claims.”

🚨🚨🚨 Read our statement on today's notice from the FDA regarding synthetic nicotine applications: pic.twitter.com/6deVTVGxJ7

NOTE: CASAA Live is back this week!

On this episode the CASAA Twitter Spaces panel spoke with journalist Alex Norcia about his investigation into the inner workings of FDA and what he’s uncovered so far via Freedom Of Information Act (FOIA) requests.