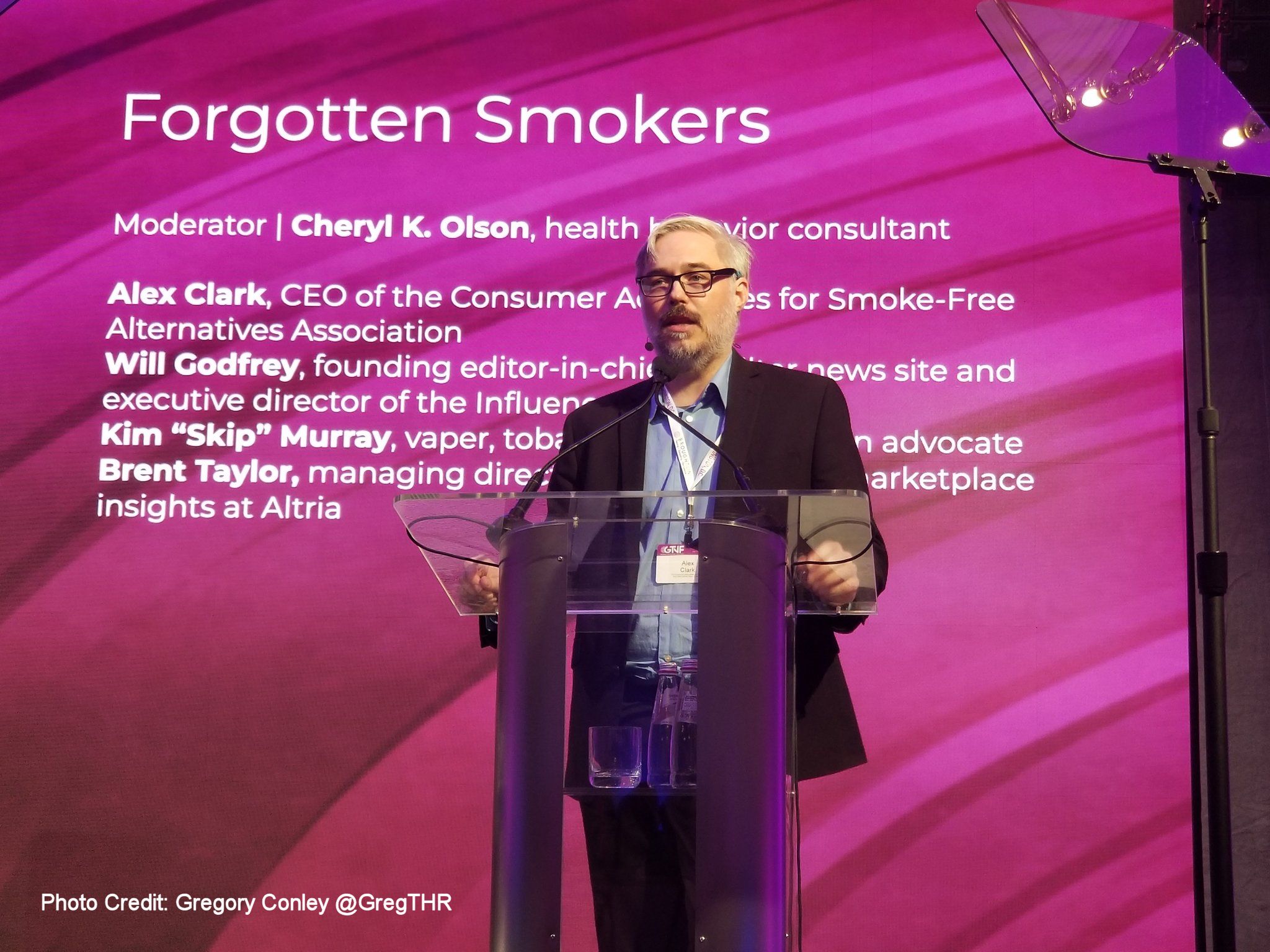 In a surprising AP interview, new FDA Center for Tobacco Products director Brian King tells the reporter that the public misperception that vaping is as dangerous as smoking isn’t “consistent with the known science,” and that vaping has “markedly less risk.”

He also said that–of the “really important science and innovations that have occurred in the industry in recent years”–the “most notable” for him is nicotine salts, which he says “could hold some public health promise.”

Unfortunately, it seems the agency has no plans to correct those misperceptions.

FDA's Brian King told AP vaping is safer than smoking and is aware of misperceptions about e-cigs. Declining questions after speaking at #GTNF yesterday, I caught up with him when leaving to ask if FDA is gonna do anything to correct this. In a word, no. https://t.co/GVpH1JiKre

Past 30 day smoking and vaping declined since 2019 (from 7% to 5.5% and from 28.7% to 17.4% respectively) in addition to ever-vaping dropping from 45.1% to 31.7% without the Maine government passing a flavor ban. Yet Tobacco Control still claims that vaping is somehow “turning the tide” of declining smoking rates and wants flavors banned.

Also note how data is reported in this article. The extremely low smoking rate isn’t reported at all in the article and in a linked article the smoking rate is teens reporting having smoked at least once a day in the past 30 days vs. the rate of teens reporting EVER vaping. They should have compared apples to apples, such as past 30 day smoking with past 30 day vaping, or ever smoked with ever vaped. It seems to be deliberately deceptive.

This one pulls out all of those anti-vaping myths, misdirection and lies, then fails to report that teen vaping has declined dramatically (and smoking is down to historic lows,) that the 2 million teens “vaping” includes those who had even 1 puff in the past month, and that the 4.9% of high school teens who vape frequently would otherwise be SMOKING.

Hot take but NY would have been better served by treating e-cigarettes as a harm reduction measure and strictly enforcing adult sales rather than diving into panic legislation. Now we have the same quasi-unregulated market as before with just more red tape everyone has ignored.

This is not a “Kid-Saving” law, it’s a law to punish adults who wish to quit smoking. I’m embarrassed to be from Syracuse New York with a trash headline like this.

READ MORE: A kid-saving NY law almost no one enforces: How the flavored vape ban went up in smoke

An excellent panel discussion by all — Are people who smoke being forgotten in the current regulatory fervour to demonise safer nicotine products?
Consumer advocates @imaracingmom and @Hello_Alex CEO of @CASAAmedia did us proud!
👏🏻👏🏻👏🏻👏🏻 https://t.co/Yeyqgr6OQe

Another fabulous talk from @Hello_Alex @CASAAmedia calling for change of language – pls stop calling people who smoke “smokers” – “we are PEOPLE WHO…” “Stop treating us like cattle… we are being pushed…” pic.twitter.com/WRpg0WeOiw

“Language matters and the way that we address this issue matters.”#GTNF pic.twitter.com/T5VYqul8HI

On September 27th, CASAA, the American Vapor Manufacturers and Americans for Tax Reform released a special livestream announcement of the We Vape We Vote 2022 Tour!

Every American should have the right to use vaping to quit cigarettes. Critical health decisions should be up to the individual. Not the FDA. Not the CDC. And certainly not nanny-state politicians in Congress.

This fundamental belief underlies our entire effort. That’s why we need leaders who recognize vaping as a powerful harm reduction tool and the single most effective smoking cessation device ever created.

Millions of American adults vape to quit smoking, and our coalition continues to grow despite every hurdle thrown at us by overzealous bureaucrats in Washington. The only way we can stop the outright prohibition of vaping is to mobilize and vote.

Join us today, and together we will tell our elected officials: We Vape, We Vote.

RESEARCH // Excuse Me, but Your Bias is Showing

If you’re in public health research and truly wanted to save lives, you’d LEAD with vaping being associated with a “39% percent less risk of MI when compared to traditional smoking” AND make it very clear that the “vapers” who were compared with never-vapers also had a history of smoking.

Instead, these “public health researchers” put the focus on the different outcomes between vapers and never-smokers/vapers, claiming vaping was the reason for increased risk rather than the fact that the vast majority of “exclusive” vapers also smoked for years or decades before they vaped–a more likely reason they’d have increased MI risk rather than a few years of vaping.

"All studies in the meta-analysis are cross-sectional, thus ruling out any interpretation on the causal association between the studied variables. There are smokers present in both groups. Thus, this analysis cannot rule out any effect of cigarette smoking on MIs".

Researchers claim that, prior to vaping becoming popular in 2014, the youth smoking decline was steadier and steeper. Consequently, they say, 1.66 million more youth started smoking than would have otherwise, “providing evidence…for the gateway effect.”

[The TL/DR answer is No. If you want to know why we reject this claim, keep reading!]

This makes it sound like youth smoking had a large steady decline before. But did it really?

No. Between 2006-10, well before vaping took off, there was also a 4 year stall. High school smoking only dropped 2.6 percentage points and between 2009-10 there was ZERO change.

So, by choosing to AVERAGE the annual declines over 11 years, researchers were able to “smooth over” that 2006-2010 stall, making the later one seem unique.

So, when we use ALL available data, HS smoking dropped more on average per year in the 6 years AFTER vaping became popular than it did in the 11 years prior.

But you may have noticed that we’ve only been looking at high school rates. Why did researchers choose to combine both high school and middle school data?

As high school smoking is a better predictor of future adult smoking, did all of the alleged “extra” 1.66 million teens who smoked in 2015-19 continue to smoke?

We can look at the young adult data for a hint….

So, where are all of those “extra smokers” from vaping?

In closing, the researchers omitted important data (2020-21), “predicted” that there should have been fewer teens smoking by pretending past slow decline periods (2006-10) weren’t a thing, and ignored follow-up data (young adults) that could verify increased smoking.

Did they prove there is a vaping “gateway effect?”

I've read a lot of dishonest papers. This is one of the most dishonest I've seen.https://t.co/87468VyeD7

READ MORE: Impact of the e-cigarette era on cigarette smoking among youth in the United States: A population-level study

This week, join CASAA Live for our conversation with Christopher Snowdon, journalist and author of several books including “The Art of Suppression: Pleasure, Panic and Prohibition since 1800,” and “Velvet Glove, Iron Fist: A History of Anti-Smoking,” about his recent Twitter study post, his books on prohibition and the war on tobacco, and his take on the war on vaping!