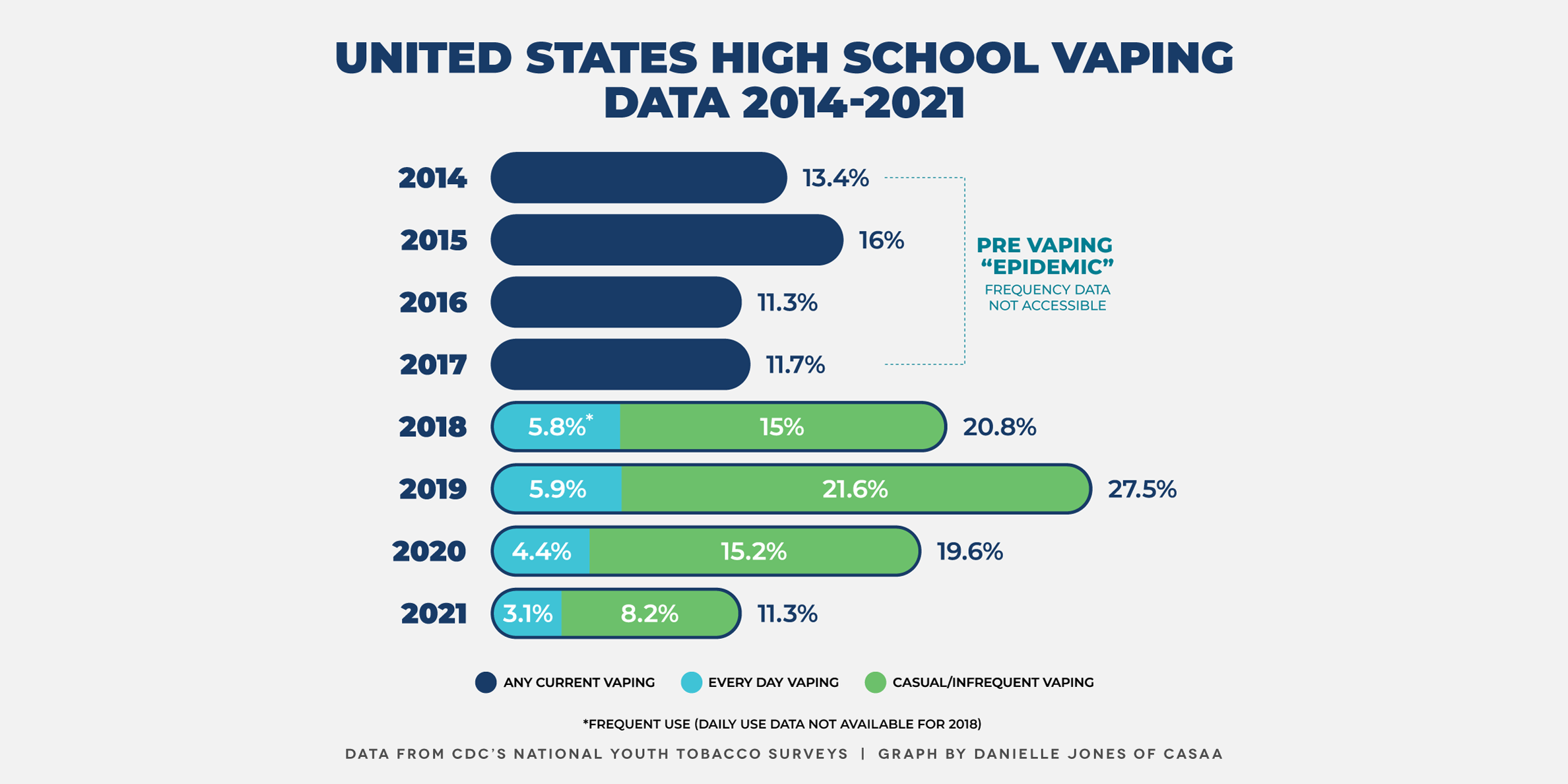 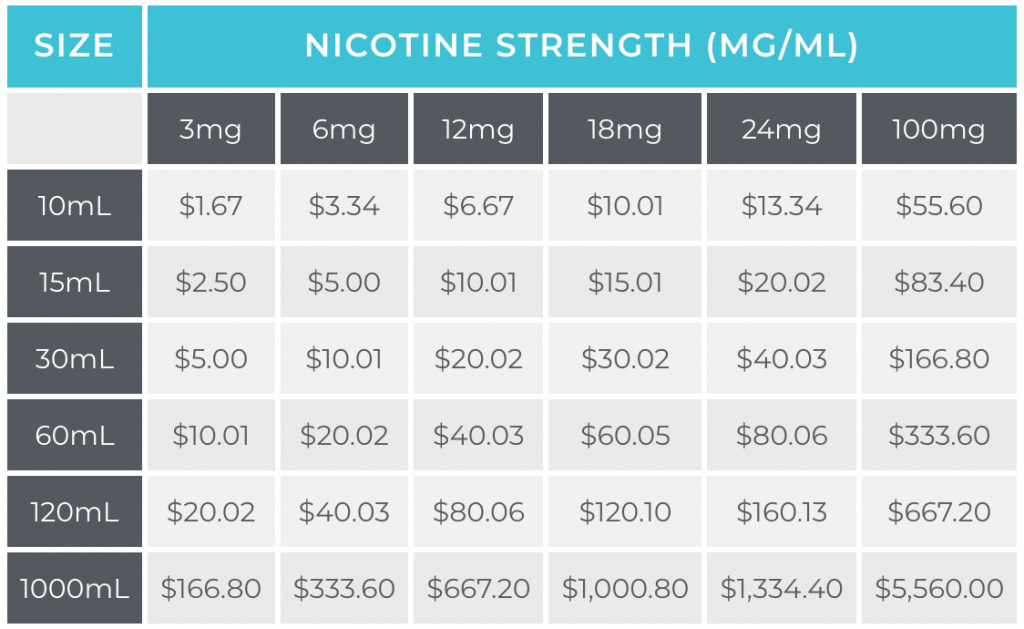 (UPDATED) Good news! The rule change banning flavored vapor products has been WITHDRAWN and will not require consideration by JCAR. However, we do expect this proposal to be taken up by the legislature, so join CASAA & follow us to keep updated!

The Denver City Council is moving forward with a proposal to ban the sale of flavored tobacco and vapor products. Following more than two hours of testimony and debate, Denver’s Safety Committee postponed a vote on the ordinance until Wednesday, October 27, 2021. If the committee votes in favor of the ordinance on the 27th, it will move on to consideration by the full council.

A fantastic piece by my friend and colleague Art Way connecting the dots between war on drugs and war on nicotine – and highlighting the intense effort to enact full flavor ban in Denver.

City Council member Nelsie Yang says she wants to “make it as difficult as possible” for people to use nicotine–even very low risk products. All the council members seem to agree with her, but the PUBLIC HEARING is October 20th!

READ MORE: St. Paul to introduce some of the strictest tobacco rules in the nation

Opinion: this ordinance will be deemed unconstitutional every person has a right to privacy under the constitution of the Bill of Rights. People don't like politicians telling people what to do .
No Smoking, Toking, or Vaping in Fresno Apartments? https://t.co/kRbfI1pTBY

Governor Gavin Newsom has signed an additional 12.5% tax on vapor products into law. Because sales are legal only to those over 21, it will just end up harming adults, having little (if any) impact on teen use–which is already declining.

California Gov. Newsom wants to increase the vaping tax to combat youth e-cigarette use, yet, in 2018 California collected $2.8B in tobacco taxes & settlement payments yet spent only $240M on programs to combat youth tobacco & vapor usehttps://t.co/u5pbChEMLA #caleg #cagov pic.twitter.com/cjHDJ4uc9w

And with a unanimous vote the city council of San Jose passed the flavor ban ordinance. Game over, adult smokers wishing to seek out safer alternatives. Game over when, like in San Francisco, youth smoking rates will increase as a result of illicit market availability.

Dr. Brad Rodu dispels the myth that the so-called “teen vaping epidemic” was leading many teens into “a lifetime of addiction.” Those who were 18-24 years old in 2020 were 13-19 years old during the height of the moral panic, yet the vast majority clearly weren’t “addicted.”

New CDC data from 2020 falsifies federal officials’ claims that vaping is enslaving a whole generation of teens to nicotine. Vaping among young adults is half that among high schoolers https://t.co/ffqP2jDVf7 pic.twitter.com/i57Y6VzuFN

Stocks advisor inadvertently predicts the public health disaster that will happen because of the proposed federal nicotine taxes, telling investors that the taxes “would make non-cigarette products less attractive than cigarettes.”

Dr. Richard Feldman follows misleading anti-vaping script, including using irrelevant, outdated data: “Although there has been some recent decline in e-cigarette use among high school students, use increased 135% from 2017 to 2019.” This completely ignores that high school vaping is much lower now than it was between 2017 – 2019, which begs the question, “Why use that data if not to perpetuate the moral panic over vaping?”

Indiana hasn't raised its cigarette tax since I was in college (2007) and legislators have rebuffed attempts to hike it by claiming any hike would be "regressive."

Now, those same legislators are apparently set to raise their proposed 10% vape tax to 15%. Ridiculous. #INLegis

IN THE NEWS // US Bans IQOS Imports

Importation of a tobacco harm reduction product–a product already deemed by FDA to be “appropriate for the protection of the public health” and credited for reducing smoking in Japan–has been banned, yet again leaving adults who smoke with fewer safer options.

AROUND THE WORLD // Australia Vape Law

Australia’s new law requiring prescriptions to buy vape products (NOT required for deadly cigarettes) took effect Oct. 1st. Most of the country bans even POSSESSION without prescription, while the AMA urges doctors not to prescribe them!

Legalise Vaping Campaign Director Brian Marlow quoted as saying in this article: The prescription model is a 'massive step backwards', fearing it will only accelerate black market distribution of nicotine products.https://t.co/cO0t56pIya

READ MORE: Nicotine vapes are about to become illegal without a prescription.

Fewer teenagers appear to be using e-cigarettes, but the FDA and anti-nicotine crusaders see only reasons to regulate.

You wouldn’t know it by reading press releases from the FDA or CDC or by listening to the Campaign for Tobacco-Free Kids or the Truth Initiative, but the US government released encouraging news last week about youth vaping.”
~Marc Gunther

We know there are much better strategies to use, such as enforcing minimum age laws, educating adult smokers and helping smokers access alternatives.”
~ Sonia Pruitt (The Black Police Experience)

New data released from the CDC shows a continued decline in youth vaping, with use returning to “pre-epidemic” levels. Also notable is that casual/infrequent vaping is the most fluid. Prior research has shown the majority of daily users have a history of smoking. 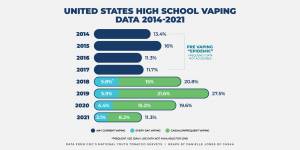 While public health groups conveniently use COVID restrictions to dismiss surveys showing the dramatic drop in teen vaping, they clearly ignore that those restrictions did NOT cause a similar drop in teen cannabis/alcohol use.

Youth marijuana and alcohol use has not decreased during the COVID-19 pandemic, challenging the notion that youth substance use can be reduced by limiting their supply, according to a recent @NIH study: https://t.co/SNPuGKDlsZ