Excellent, must-read exposé by journalist Marc Gunther of the anti-vaping tactics of the Truth Initiative.

“This has become a pattern at Truth Initiative: Draw questionable conclusions from scientific research to attack vaping, and ignore evidence to the contrary.”

READ MORE: The Half-Truth Initiative: How an Anti-Smoking Group Lost Its Way

Listen to our recent Twitter Space interview with Marc Gunther about his article!

Anti-harm reduction organization Truth Initiative discusses a recent study of vapers on Reddit–where 93% of users are 18-49 years old–that found vapers are desperate for access to the flavors that have helped millions of adults keep from smoking.

Their response? Close all “loopholes” to make sure they can’t get them.

Truth justifies this cruelty by bringing up the unrelated EVALI outbreak, continuing with the outdated “epidemic” rhetoric and the disproven claim that teens vape because of the flavors.

What @truthinitiative neglects to mention in this article is that the people searching social media for flavors were ADULTS trying to find products that adults use to quit smoking & that Truth has worked to ban pushing its false claim of a youth epidemic.
https://t.co/PWF9xVLJnx

Gallup poll finds Americans are successfully brainwashed by anti-harm reduction propaganda–finding people want stricter vape regulations–but gives no details on WHAT the regulations are that people want. On the plus side, 8% of adults vape, but only 2% report dual use–contradicting the claim that “most” adult vapers still smoke.

If there was more emphasis on true science based focused campaigns that show vaping IS safer than smoking more Americans would rather allow vaping than want to ban something they do not understand. Gallup to the truth, not BS

After warning in May that dual use has no health benefits and expressing concern that those trying to quit would continue to dual use instead of quitting, the American Heart Association is now worried that daily vaping is rising. For adults, moving to daily vaping is a possible indicator for having completely quit smoking. So why didn’t AHA bother to investigate or report on how the increase in daily vaping related to dual use/smoking?

Despite researchers noting the significant decline in adult smoking & a decline in vaping for adults who were attempting to quit smoking, they continue to refuse to acknowledge any possible connection between increased vaping & declining smoking rates!https://t.co/m5Yt9HWNeb

READ MORE: Daily e-cigarette use rising despite slight decline in current use among youngest adults 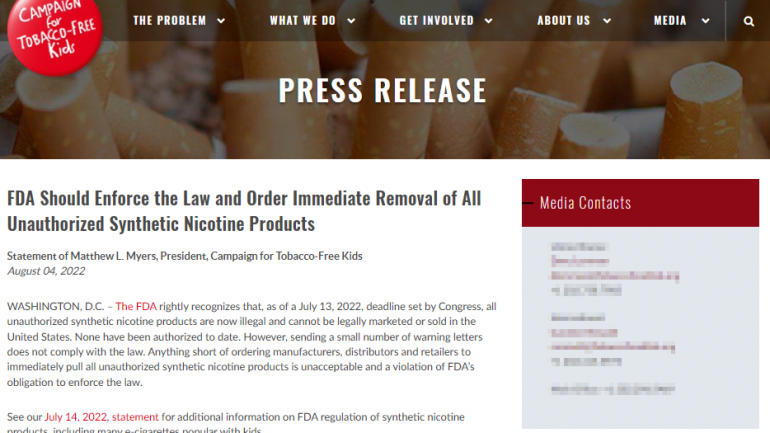 The Bangor City Council has once again voted to ban the sale of flavored tobacco. https://t.co/2yv8uDtd0b

AROUND THE WORLD //New Zealand’s ‘End Game’ is Prohibition

New Zealand–a country recently more open to tobacco harm reduction than most–is now fully embracing prohibition. Lawmakers have introduced a bill mandating very low nicotine smoked tobacco, reducing tobacco outlets by up to 95% and prohibiting people born after 2008 from ever buying tobacco. If nothing else, this should boost the country’s already thriving black market.

I'm no statistician but 'modelling' used to justify prohibition in NZ doesn't disclose its underlying assumptions & no mention of the black market. This head-in-sand insistence that NZ is immune to tobacco smuggling due to our 'water border' is ridiculous. https://t.co/idx6r4kuDd

READ MORE: New Zealand’s ‘tobacco endgame’ law will be a world first for health – here’s what the modelling shows us

While a menthol cigarette ban may seem reasonable on the surface to some, it’s far more complicated than you may think. CASAA just submitted our formal comment to the FDA and you can read it, along with our position statement, below.

Banning other stuff isn't going to stop vaping bans. Vape advocates really need to stop and think about whose side they're really on, and understand that anti-harm reduction groups will never be on our side, no matter who we throw under the bus. Bans 👏Don't👏 Work👏 https://t.co/00CkMYUbbU

Massachusetts has arraigned four men for “illegally trafficked marijuana and THC-infused products, including some that contained traces of fentanyl, and distributed untaxed, black-market tobacco and electronic nicotine delivery system (ENDS) products—the majority of which were counterfeit and flavored, in violation of the state’s ban on flavored tobacco and ENDS products…”

It’s complete insanity that the very low risk vapes helping millions of adults quit smoking are only on that “illegal” list because of FLAVORS.

Policymakers should be wary of shoddy research purporting that flavor bans work.

Findings from a new study conducted by an international group of researchers at 6 independent laboratories “are a strong rebuke to repeated claims by medical societies that using e-cigarettes or heated tobacco products are just as dangerous as smoking.”

The findings are critical when heart disease is a major factor in smoking-related deaths, writes @aftariak. And the study is part of a wider project to replace junk science with credible data:https://t.co/WpPiyLpnVK

With this study article being shared by anti-harm reduction groups, it’s important to highlight what the study also says: overall association at the population level is likely QUITE SMALL. Also, smoking has long been known as a precursor to cannabis use, so it may be good news that low risk vaping may just be replacing high risk smoking in this case.

READ MORE: Study: Kids who vape tobacco are more likely to go on to use cannabis

We were thrilled to have Marc Gunther on this week’s Twitter Space to discuss his recent exposé on the Truth Initiative for Filter Magazine. You won’t want to miss this episode – now available on CASAA’s YouTube channel, too!

You won’t want to miss this episode, so hit the reminder button below and join us TODAY at 3 PM Eastern / 7 PM GMT!https://t.co/O2dWYgAgfd

CASAA Live is proud to present this replay of our conversation with Dr. Marewa Glover, director of the Centre of Research Excellence in New Zealand. She is a behavioral scientist with over 30 years of experience in public health and over 100 scientific papers. Dr. Glover is well known for her compassionate insight, advocacy on tobacco harm reduction for people who smoke and–despite the great risk to her career and reputation–calling out Tobacco Control for its harmful policies and priorities.