Ask President Trump to demand Congress remove the ban on mailing vapor products from the 2021 omnibus bill to preserve adult consumer access to life-saving vapor products and save thousands of vaping-related online jobs!

Read CASAA director Jim McDonald’s article on Vaping 360, explaining the disturbing ramifications of the passage of the “Preventing Online Sales of E-Cigarettes to Children Act” (ie. the “Vape Mail Ban”) in the 2021 omnibus spending bill.

Have you taken the annual eCigIntelligence survey? Help us collect real evidence to be used to educate policymakers on why vaping products MUST to remain affordable, appealing (flavors) and easily accessible for adult consumers! 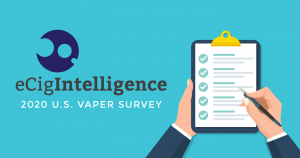 Researchers continue to claim teen vaping is a “gateway” to cigarette smoking, while IGNORING REAL WORLD STATISTICS that, despite their study predictions, prove TEEN SMOKING HAS DECLINED TO RECORD LOWS as vaping increased. Additionally, when vaping drops, smoking rises!

No one ever answers this question. Maybe you can?

Where are the new smokers? pic.twitter.com/PzVieetDPT

READ MORE: Vaping Could Nearly Triple The Chance Of Smoking In Teens

“Study” from anti-vaping Stanton Glantz et. al. completely ignores MILLIONS of adults who successfully QUIT SMOKING in the past decade from buying vapor products as “consumer products,” rather than as pharmaceutical products, followed by RECORD LOW adult and youth smoking rates that cannot be explained by taxes, smoking bans or tobacco control propaganda. The real world data completely contradicts their limited observations. It seems apparent that the ANTZ (Anti-Nicotine and Tobacco Zealots, as they’re called in the THR advocacy community) will be pushing for Australian-style regulations, (ie. requiring vapor products to only be available under prescription.)

I regret to inform you that Stanton Glantz and the University of San Francisco, California are at it again. https://t.co/rkqKZpUVtB

I’ve read the article, which in fact explicitly states- unless they used e-cigs daily or as part of one of several quit smoking studies, in which case it was found that they indeed DID help adult smokers quit.
Is it so hard to admit that they CAN provide cessation in some cases?

In the UK, public health officially endorses vaping to quit smoking. Lisa may still consume nicotine, but she has QUIT SMOKING, reducing her health risks by at least 95%. It’s not the nicotine that causes the harm, it’s the SMOKE!

Public health in the UK is amazing. Like how Public Health England reports on e-cigarettes' reduced harm.
See ALL the reports here: https://t.co/jAAyOjXyEi pic.twitter.com/fptc1S4ztd

The number of teens who use tobacco products fell 28% in 2020, however, due to public health propaganda lying about the risks, teens mainly quit using the LOWEST RISK products, while smoking rates remained unchanged.

The declines were driven largely by lower use of e-cigarettes, cigars and smokeless tobacco products.”

Underage tobacco use has fallen this year, a decline that started even before the U.S. quarantines and lockdowns https://t.co/UN1xIkejiB

HEADS UP // Prior Lake, Minnesota

It’s already illegal for anyone under 21 to purchase vaping products, so city’s plan to ban flavors will just make it that much harder for ADULTS to buy low risk, flavored vaping products than to buy deadly cigarettes.

DO MORE: If you live in Minnesota, join the CASAA Minnesota Facebook Group

Good news! The proposed ban on sales of all flavored vaping/tobacco products failed to pass in committee! However, we expect to see this come up again in early January, so be sure to watch for a future Call to Action!